According to the particulars of offence, the accused, Abdou Sanneh, on 19 July 2015 at Jamburr village in the Kombo North district of the West Coast Region, assaulted his mother, Nafi Colley, by slapping her on her face and threw her on the ground.

When the charge was read to him, he denied it and then applied for an adjournment for him to secure the services of a lawyer to represent him, and his application was granted.

Meanwhile, he was granted court bail of D5,000 with a Gambian surety. 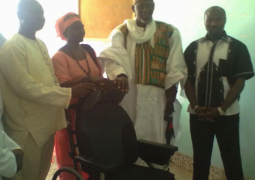