The police accused Mambury Njie that some time in 2001, as permanent secretary number 1 at the Office of the President in Banjul, being the officer responsible for economic and energy affairs, he willfully neglected his duties by failing to advise appropriately the Office of the President in the approving of the license of Carnegie Mineral, and thereby committed an offence.

The first prosecution witness, Abdoulie M. Cham, former staff of the geology department, told the court that he recognised the accused person as the then permanent secretary 1 at the Office of the President.

Mr Cham further told the court that he was appointed in 1984 as geology assistant, and rose to various ranks before he left for studies in Ghana. In July 2000, he returned with BSc in geology

He started knowing the Carnagie Mineral Company when he returned from study in Ghana, as the company was already in The Gambia searching for mineral sands in the coastal areas in 1999.

Their exploration licence had been renewed, because the company wrote to the ministry responsible for renewal, and the department forwarded the application to the Office of the President for approval; which was done, he told the court.

“The department of geology is directly under the supervision of the Office of the President, where the accused person was the permanent secretary number 1 at the time,” added Mr Cham.

The said the department later secured approval from the Office of the President, and the licence was renewed, and subsequently forwarded to the company to continue operations.

Under cross-examination by defence counsel LS Camara, the witness told the court that in 2008, his service was terminated at the geology department, until 2010 when he was reinstated as the director-general.

He said his service was again terminated.

Told that his service was terminated because of the issue of Carnagie Mineral company, the witness said his letter of termination did not specify why he was fired. He added when the license was renewed, he was the deputy director at the time.

He denied ever being arrested by security personnel in connection with Carnagie Mineral Company, and that he had indicated, in his statement to the police, that the minister responsible for mining approved exploration licences for operations.

The case was adjourned to 21 April 2014, for the hearing to continue. 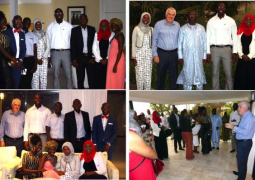