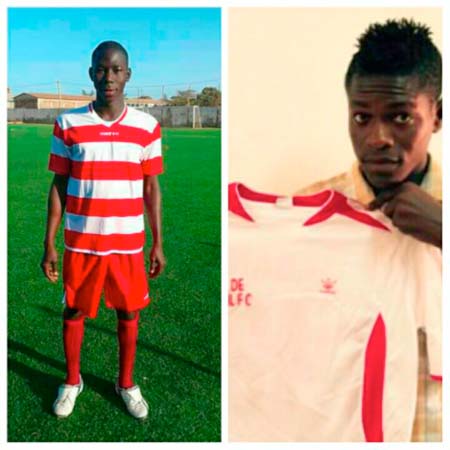 Real de Banjul Football Club are delighted to confirm the transfer of striker duo Madi Fatty and Sulayman Sillah to NGB Niarry Tally of Senegal on a permanent deal.

The duo signed respective three-year deals with the Dakar based Club before the closing of the transfer window in Senegal last week.

Fisher, as he is referred to by his former teammates, scored in Real’s 3-0 semi-final win over US Goree before claiming the trophy with another 3-0 success over Mauritanian side ASC Concorde.

Sulayman Sillah, who joined Real de Banjul in August of 2015 from Lamin United as a teenager, was sent out on loan to Tallinding United where he helped them gain promotion to the GFF Division One as last season’s Second Division Champions.

The tall lanky forward was sent to NGB for trials and he had an instant impact hitting a hat-trick in his first test match which landed him his dream move.

Speaking to www.realdebanjul.gm from his Dakar base, Madi expressed delight after securing his move.

“I am very delighted to join Niarry Tally with my teammate Sulayman Sillah although it was little bit of a challenge to adapt to living in a new environment,” he said.

“We hope to make our new club happy by scoring goals in the league and in the CAF Confederations Cup next year.”

The duo celebrated their league debut with a goal each forming a new Gambian front partnership in Niarry Tally’s 4-0 thrashing of Casa Sport on Tuesday at the Stade Demba Diop.

Club president William Abraham said: “I am wishing them well and hope that these players would further work hard and develop even better to move to a higher level.”

Everyone at Real de Banjul would like to thank Madi and Sulayman for their contributions to the club and wish them the best of luck in their careers, he added.