Linguere and Vidar are household names in Bakau Nawettan, having won series of trophies in that nawettan in previous years.

Linguere and Vidar have also produced the finest and talented players for Bakau zonal teams as well as for the Gambia national teams including U-17, U-20 and the senior national team.

The Linguere-Vidar encounter is always expected to produce exciting and fascinating football and attract multitudes of spectators from Bakau and its satellite areas.

The Super Cup marked the curtain raiser of the new Nawettan league season in Brufut.

Meanwhile, the 2013 Banjul Sports Committee Mayor’s Trophy final has been set for Saturday 17 August 2013 at the Banjul KG5 Mini Stadium.

The final, which will be played between Jameaen FC and Man City FC, is described by fans as a nail-biting clash. 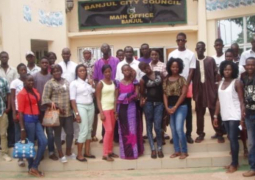