The Gambian leader, President Yahya Jammeh, has urged all Gambians including those in the Diaspora to join hands in building a stronger image of the country, which would earn the respect of others, now that the Gambia Radio and Television Services (GRTS) is on satellite and can be viewed and heard across the globe.

In a statement read on his behalf by Dr. Isatou Njie-Saidy, Vice President and Secretary of State for Women's Affairs at the inauguration ceremony of the GRTS satellite project on Monday, President Jammeh said his passion in this crucial project lies not only in immeasurable and diverse opportunities it provides to The Gambia in its drive to be reckoned with among the comity of nations, but also in the opportunities it provides for Gambians in the Diaspora and non-Gambians alike to get direct access to accurate information on The Gambia.

He added that it would also afford the country the opportunity to market its huge business potentials including attractions that can lead to favourable investment undertakings by foreign investors in the economy.

"With GRTS going satellite, news, information, and other facts about the country, the people, our culture, and heritage, would now be accessed by all internationally regardless of where one is located," he said.

"In launching this project therefore, I wish to urge all Gambians including those in the Diaspora to join hands in building a stronger image of the country, which would earn the respect of others," he expressed.

for consolidating the advantage of the information and information technologies. He added that the launching of this multimillion-dollar satellite project for GRTS, is a solid fulfilment of his administration's aspiration to enhance the quality of broadcasting at the GRTS.

He posited that by becoming more positively exposed internationally, there no longer would be space for detractors and unscrupulous elements that do all it takes to spread false and potentially damaging stories about the country.

"The fact that we are now on satellite broadcasting, most of these stories would be demystified and corrected," he said.

Equally, President Jammeh urged the GRTS management and staff to take special care of the facilities and infrastructure by ensuring that they are well kept and maintained in the interest of sustainability.

He also called for more training of staff to operate the system and to explore new frontiers of co-operation, especially in the areas of product branding and the production of quality programmes and products that are of the highest international merit. The project is said to cost about US$9.5 million.

Speaking earlier, Momodou Sanyang, Director General GRTS, who has no doubt that GRTS now has the most advanced studio in the West African region, said the satellite project is giant step in the country's pursuit for growth and wider acknowledgement.

A happy and cheerful Sanyang thanked President Jammeh for the continual support he had been rendering to GRTS and acquisition of satellite for The Gambia.

He also thanked all the institution that had helped his institution and singled-out Mr. Momodou Turo Darboe as an individual who he said repainted the whole complex and also provided fire extinguishers for the edifice.

Alhagie Sering Faye, who gave the vote thanks said GRTS was once referred to as Radio Kombo because their signals were limited to Kombo's, but now with the launch of this broadcast satellite, that would send both radio and television signals across the globe, GTRS could be heard and viewed throughout Africa, Europe, the Middle East and most part of the America, the United States and Canada. 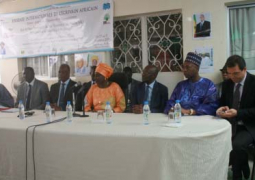