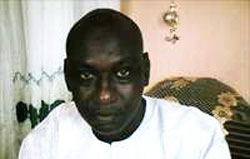 Tomorrow is the date set for the much-anticipated Super Cup final, which will eventually serve as the curtain-raiser for the summer championship.

Linguere the last year's League champions will be involved in a pulsating and a mouth-watering Super Cup Final when they entertained Ron-Mango that clinched the Knock-out trophy after thumping Sea View in the final, played at the Independence Stadium last summer.

Pointsport visited both coaches at their residence in Bakau yesterday, to find out the level of preparedness ahead of the much-talked about Super Cup Final.

Alagie Drammeh, who is for the sixth time given the responsibility to lead Ron-Mango to another championship final, remained confident of lifting his first Super Cup title with the team he described as the best.

Platy as he is fondly called who guided Ron-Mango to the Knock-out title in 2008, spoke about the importance of the Super Cup Final, noting that it will serve as a revenge for the team.

'We are strong enough to beat Linguere since we have experienced players like Musa Njie, Sambu Tamba and the valuable contribution of star striker Pa Amadou Daddy Gai will surely push the team," the confident Coach told our reporter.

The Assistant Coach of Linguere, who is highly tipped to win the Super Cup title, Pa Jallow expressed optimism of Linguere's possibility of repeating another historic moment. He said loosing the Super Cup Final against Ron-Mango is not an option, given the fact that the team have been training so hard in order to keep up the momentum ahead of Friday's final.

Mr. Jallow added "we are much more prepared than Ron-Mango and if they are to beat us, they need to put up an extraordinary performance in order to do so because Linguere is becoming more mature, more versatile and hungrier basically when we come into the game, despite the change of management," said the ambitious and elated Pa Jallow.

Mr. Jallow, however, believed Dawda Ceesay or Soto's intervention would absolutely go a very long way in trying to push the team in its effort to retain the league title.