Kerr Chebo FC on Saturday beat Wallidan FC of by a goal to nil in the opening game of the Late Uncle Badou Jasseh Memorial Tournament organized by a Kerr Mama citizen residing in the United States of American, where he is a referee.

Bai Mundaw Jallow scored the goal of the game for Kerr Chebo FC to earn his side their first win of the competition, which is being played in a league format.

Both encounters were played at the Alagie Gabi Sosseh Mini Stadium in Kerr Mama village in the Upper Niumi District of the North Bank Region.

A-two-day coaching and refereeing clinic was also organized by the same sports committee for the coaches and referees within the area, and goal nets were also distributed to each of the participating teams in the nawetan at the end of the clinic.

The opening game of the tournament was graced by dignitaries such as the National Assembly Member for Upper Niumi District, Cherno Omar Jallow, and the district chief, Lamin Queen Jammeh, as well as sports personalities.

Kerr Demba FC will take on Kerr Dekodeh FC on Saturday 1st October 2011 at the Alagie Gabi Sosseh Mini Stadium, while Ma Sosseh FC of will lock horns with Pakau Njogu FC in other games of the same nawetan competition.

At the Serrekunda West Mini Stadium on Monday, German Boys FC beat Pipeline FC by 2-0, with Alieu Badjie opening the score line for the Latrikunda German side in the 31st minute of the game. 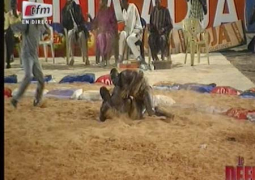