Lasisi's Production has completed all preparations for the premiere of its film called Silent Chapter. The event will be held tomorrow 26 June, 2010 at the Alliance Franco Gambienne along the Kairaba Avenue, starting at 8 pm.

Speaking to reporters at a press conference recently organized, Yankuba Jarre, a producer and director with Lasisi’s Production, said coming up with such a project is part of promoting our own culture.

"We have taken this challenge, and we hope to do more films in The Gambia," he added.

The Lasisi's Production director called for more support from the people, adding that, "we can develop this country through the entertainment industry."

He added that despite all the challenges faced, "we believe the calibre of actors we have can do their best. All the actors have contributed one way or the other to the success of this project," he added.

According to Jarre, this film was produced last year with 68 actors, and thanked Banjul Breweries for their support.

Speaking earlier, the chairperson of the project, Jalimadi Jobarteh, told journalists that this film production in the country was another achievement for the entertainment industry.

Silent Chapter is an interesting movie, a very touching movie, which provides entertainment as well as education, according to the producers of the film. 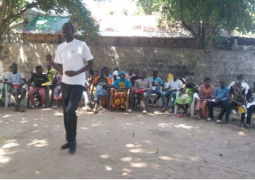