The former Chief of Defence Staff, Lt. General Lang Tombong Tamba, has told the High Court in Banjul that it is not true that he was dismissed from the Gambia Armed Forces for embezzling a huge amount of money.

He said that the money the President was referring to, during a visit to the Yundum Barracks, was about a contract awarded to a Senegalese company 12 years ago, when he was a Captain in the army.

Lt. Gen. Tamba, who is standing trial alongside seven others on charges of treason, also told the court that his aim was to foil the March 21st 2006 abortive coup attempt, and not to become a President, and that he foiled the 21st abortive coup attempt, together with some loyal soldiers and officers of the Armed Forces.

"I was here in The Gambia and the President was in the Islamic Republic of Mauritania, and my ambition was to foil the coup. My ambition is not to become a President," he declared.

Ex-CDS Tamba was speaking under cross-examination by the Director of Public Prosecutions, Richard N. Chenge, when he concluded his defence on Thursday before Justice Emmanuel Amadi.

Asked by the DPP "You planned a coup with the former CDS Ndure Cham?" Tamba replied, "every Gambian knows how I foiled that coup."

"It was when Ndure Cham told you that you cannot be Head of State, and then you reported Ndure Cham for planning a coup,” DPP Chenge further stated.

In response Tamba said: "It is not true, it is pure imagination." He maintained that the coup was foiled and, as a result, Ndure Cham fled the country.

Further asked whether he was "dismissed" from the army, Lang replied that the letter indicated that he was "removed" as the Chief of Defence Staff.

The cross-examination in Question & Answer format

DPP: You were dismissed because you embezzled huge amounts of money at Gambia Armed Forces (GAF)

Lang: That is not true.

DPP: You will accept that HE the President visited Yundum Barracks to inspect?

Lang: I am aware. The money the President talked about was a contract awarded to a Senegalese company since 12 years ago, when I was a captain. So, it is false that I embezzled the money meant for the soldiers."

DPP: The letter that dismissed you stated that you hand over all military properties you had in your possession?

DPP: "In addition to this letter, you were again de-kited by the Armed Forces?"

Lang: "Armed Forces de-kited me following my request, and the constant telephone calls I did."

Answering a question whether he kept some of the items for the purpose of a coup, Lang replied: "That's not true."

He told the court that the ceremonial suite and the diplomatic passport remained with him after consultation between the de-kitting team and superiors.

DPP: You were found with 100 rounds of ammunition?

Lang: "My Lord, that's not true. I did not sign any inventory to indicate that 100 rounds of ammunition were found in my possession."

DPP: You have a local long barrel gun that you use for hunting?

Lang: That's not true. I have never said that in this court.

DPP: Do you go for hunting?

Lang: I don't go for hunting. I go to protect my farm against wild animals.

DPP: What do you use to protect your farm?

Lang: It's a single barrel gun.

Lang: I have no idea.

DPP: What types of ammunition do you use in single barrel gun to protect your farm?

Lang: I used whatever hunting cartridge I have with me, at the time I'm protecting my farm.

DPP: The time NIA searched your house, those hunting cartridges were found in your house?

DPP: The single barrel you used to protect your farm is your own?

Lang: It belongs to the Armed Forces, and it is there in the de-kited report.

DPP: But you refused to return those cartridges?

Lang: That's not true; because they did not belong to the Armed Forces and anybody can get them.

DPP: You need a licence to keep those cartridges?

DPP: So, it means that you don't have a licence?

DPP: Do you have licence for those cartridges?

Lang: You know that there was a coup attempt in 1996, when eleven armed people attacked Farafenni Barracks?

PC Secka: During your confrontation with PW 1 was the second accused there?

Lang: The 2nd accused was not there.

Lang: We have lunched with other people.

HS Sabally: Did you have cassava meal? 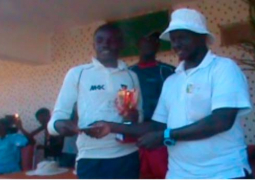