Smateq defeated Golden Leads Staff team by 1-0 in the final, played at the Gunjur Upper and Senior School football field on Saturday.

Both sides have made astonishing start to the game and piled pressure on each other, creating goal scoring opportunities but the first half failed to produce a goal.

Upon resumption from break, Smateq dominated the game and mount pressure on Golden Leads, crafting some goal scoring chances.

Their efforts yielded dividend in the 64th minute when winger Lamin Kunta opened the scores through a brilliant cross from Fabakary Jammeh alias John Obi Mikel, to earn them the tournament’s title.

Golden Leads Staff team responded for an equaliser but to no avail, ending the game in a 1-0 win in favour of Smateq.

Yankuba Suwareh of Smateq was awarded D500 as the best player of the tournament. Lamin Kunta of Smateq also received a golden boot and D500 as the leading goal scorer, notching two goals.

Red Star Family FC, Solifo FC and Sailors all received certificates and D5000 each for their participation in the tournament. 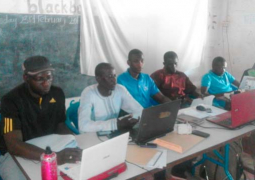