Lady in Conflict with the Law

One Binta Camara of Kunkunjang village was on arraigned before Magistrate Kumba Sillah-Camara of the Bundung Magistrates' Court on a charge of being in possession of suspected stolen property.

According to the charge sheet, on at Kunkunjang village the accused was found in possession of various items valued at D2, 242, all being the property of one Modou Bah, a charge she denied.

She was later granted court bail in the sum of D5000 with one Gambian surety.

In a separate development, one Omar Kamaso of Tallinding who had been standing trial for alleged stealing was on discharged by the Bundung Magistrates' court.

Mr Kamaso was on alleged to have stolen a bumper bicycle at Tallinding valued at D1800, being the property of one Sulayman Jallow.

However, the complainant later informed the court that he wished to withdraw the matter.

His application was later granted and the accused was subsequently discharged. 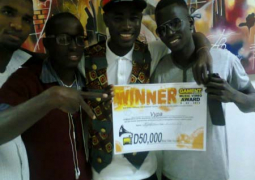