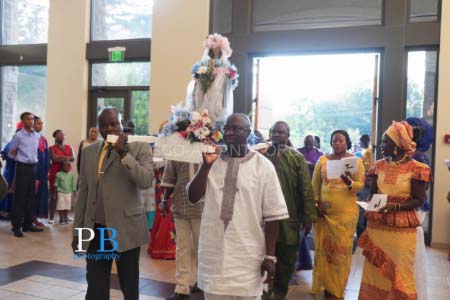 The Atlanta Gambia Christian Organization is set, yet again to celebrate the feast of the assumption of the Blessed Virgin Mary, known in The Gambia as Sang Marie.

Sang Marie is the biggest feast in the Catholic Diocese of Banjul given the Blessed Virgin is the Patron Saint of the Diocese and the Republic of The Gambia given that the Island outside the capital is named Kombo St. Mary in honor of the Blessed Virgin as Catholic historian Charles Thomas puts it.

“One could say that the vast celebrations are most fitting for Gambians, Christians and non-Christians alike. Apart from the two cathedrals in Banjul (Anglican and Roman Catholic) other major locations and municipalities have been named after Mary, among them our capital city with its environs, called the Island of St. Mary; there is also Cape St. Mary and Kombo St. Mary.

The three-day event, now an annual pilgrimage to Atlanta by Christians and non-Christians, according to the President, Jean Marenah, will kick off on Friday 19th August with a Prayer Vigil to be held at the Catholic Church in Stone Mountain.

According to Mr Marenah, his Organization has flown in from Senegal,  Abbé Jules Pascal Coly, a renowned Catholic Exorcist to lead the prayer vigil on Friday night.

He went on to add that there is no better time to come together and pray than now. “Prayer heals the divide and besides, it’s God’s gift to us,” he quipped. Marenah whose term is up, also paid tribute to the Men and Women in the Executive and the general membership of the group citing, “They are a class act”.

He thanked all for their support during the past two years claiming, “leading this group has shown and taught me a lot about life.”

By way of bag round information, Father Abbe Jules Pascal Coly became a priest on June 29, 1997 in Saint-Louis, Senegal in West Africa.

In the first three years of priesthood, Abbe Coly sensed in himself a gift that he secretly named “the gift of doing good deeds for people through prayer”, but he never dared to share it.

In late 2000, a man, sick with cancer, for whom  the doctor had predicted imminent death, met Abbe Coly who prayed to the Lord to heal the man’s cancer. After praying before the Blessed Sacrament tabernacle, Abbe Coly instructed the man of the next steps to eliminate the cancer.  A few days later, the man returned and informed Abbe Coly that his cancer in final stage disappeared to the amazement of doctors who asked him where he went and what he had done since his last visit to the hospital.

The story spread and Abbe Coly began to share his gift of healing with others.

Abbe Coly also reports, “Another extraordinary healing moment for me was the healing miracles of two terminal AIDS patients.

“The more cases I came into contact with, the more I became aware of the gift that was buried in me by the Lord, the gift of healing and deliverance, among other gifts.”

The Gambia Christian Organization extends a cordial invitation to everyone to join them, most importantly all those who need prayers. An eyewitness in Atlanta has confirmed to this reporter that he was in audience when a lady testified how Abbe Coly prayed for her when she was barren. The woman later conceived.

This, according to him, took place last year at the Church of the Immaculate Heart of Mary in Atlanta.

On August 20th, Saturday, a solemn high mass of thanksgiving to honour the Blessed Virgin will be held at the St. John’s the Evangelist Catholic Church, in Hapeville, Ga.

The Principal celebrant will be The Gambia’s Fr. Bruno Toupan, Parish Priest of the Church of the Holy Spirit in Banjul.

A benediction and adoration of the Blessed Sacrament will follow the mass, at first as part of Sang Marie here.

Speaking on the preparedness of the choir, its Director, Vincent Ndow the Choir Master, alluded to the fact that months of preparation are about to be put on display. He assured all and sundry that this year’s service will be nothing short of a replica of the Banjul Cathedral.

Well, this reporter can add that, having the Choir Master of the Cathedral of the Banjul Diocese will surely add to the beauty and pageantry of the salutations and adoration of our Mother In Faith.

Ndow, the only known Chorister of Gambian decent for a major Catholic Church in the United States, exudes a lot of confidence in his choir.  On Sunday he spoke on Kadu Ngem ak Ntofel and had this to say, “ We are ready and God willing we will fill all the hearts with lovely music.”

In a separate conversation with the Dean of Sang Marie himself, Mr Zack Ogoo, he said they are blessed to be celebrating twenty-three years of Sang Marie.

He narrated how a few people started the Sang Marie more than two decades ago in a small Atlanta apartment under Fr. Tony Gabisi.

He praised the Almighty for all the marvels he has done for the group and by extension, the pilgrims who have been coming for the past years.

Ogoo further commented on the excellent family relationship between Christians and Muslims in the Atlanta area, citing “that’s the beauty of our country”.

He added that when it’s Sang Marie in Banjul, you don’t know who is a Muslim or Christian, adding, “it’s the same here in Atlanta,” for which they are thankful to God, he chimed.

The Church services will be followed by an all-night reception and cultural evening which will also feature the West African Masquerade Awo Hunting Society (WAMS), the pre-eminent Hunting Society in the Diaspora; and according to their members, they are poised to put on a show like no other.

On Sunday there will be a picnic held in honour of the visiting pilgrims. The  “ball is at center field”  set for yet another Sang Marie extravaganza in Atlanta and whether it’s “Tartum Ego, Turu Mariama Yaaye La nyu di teral tey, Yen nyi neka eDomam, Voy len; nav len tuur am, or Ngurul Mbok Mariama, the pilgrims are ready to sing the glory and assumption of their Mother in Faith, “Jigen ji amul Gaka”.

Well Atlanta GCO is calling yet again! In sum, to all those named for the Blessed Virgin, whether it’s Marie, Mariama, Mary, Marian, Yama, Yamu, Maryan, or Mariam, we wish you all a Happy Feast!