Ebou Sanyang, the Public Relations Officer of the Gambia Kung-Fu Association has called on the entire Gambian population to consider supporting Kung-Fu in its quest to popularise the game which is still struggling to make a mark in the country's sports.

Jet Li, whose association has established at least a total of 10 Kung-Fu clubs across the length and the breath of the country since it was formed in 2008, was speaking to Pointsport in an interview at the Point's office on Monday.

"There is a need for the Gambian people, particularly those at the helm of sports affairs in the country to consider providing facilities for the development of Kung-Fu in the country which is the primary objective of the association," Sanyang said.

According toJet Li, the association has been doing extremely well in its bid to help promote Kung-Fu, as part of its effort to establish itself as one of the leading sports in the country. But he was however quick to add that the success cannot be achieved without support from all stakeholders.

He was referring to the fact that it will be very difficult for Kung fu to realise its primary objective without the support of the Gambian people, including those at the sporting fraternity.

Jet Li, whose association is on the verge of establishing an academy in order to encourage kids who want to excel in Kung-Fu, expressed the need for Gambian people to consider it in their bid to promote and popularise the game.

Ebou is of the view that if all hands are on deck Kung-Fu will soon catch up with other leading sports in the country. 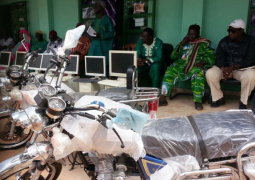