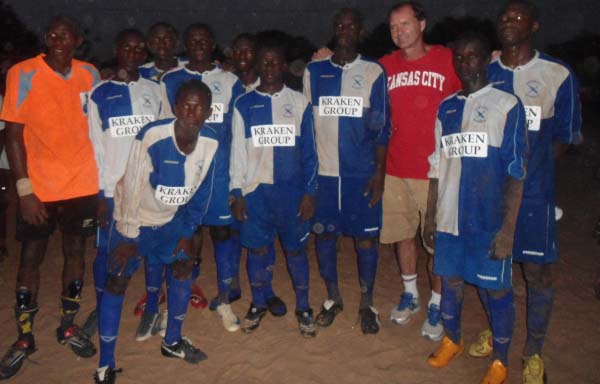 KGH Sports of Lamin crushed Banjulinding 3-1 in a bitterly fought encounter to celebrate a league cup success at the expense of their neighbours in an action-packed final played at Lamin Football Grounds on Sunday.

Three first half goals from the Lamin outfit proved to be the turning moment of the contest.

The home side, who entered the weekend’s final at the back of a controversial win over Daranka United thanks to Haman Conteh’s decisive penalty made their winning ambition known to their opponents as early as in the 16th minute when star player Haman Conteh slot home a close range opener before hammering home another to complete a brace 22 minutes later.

But before Conteh could complete the double, Lamin Ebrima Bojang added the game’s second goal in the 22 minute thanks to a fine strike much to the dissatisfaction of the coaching staff of Banjulinding including their President Gibril Jarju, who cast blame on the referee for what he claimed to have been a poor decision, saying: “The second goal of KGH should have been ruled out for an offside.”

Haman Conteh, who had an outstanding game, particularly in the first half, could have completed his hat-trick but his second-half efforts were frustrated by some great goalkeeping displayed by Banjulinding gloves man Modou Lamin Badjie who made fantastic one-on-one save to dent Conteh’s hope of celebrating a hat-trick on two occasions.

The visitors continued to push forward in their attempt to respond, especially in the second period but all their ambitious attacking options could do little to prevent them from losing the final although they could only manage a consolation goal by Ebrima Gibba in the later part of the game.

KHG Sports were rewarded for their magnificent victory as they walked away with a giant trophy and a cash prize of D20, 000 while runners-up Banjulinding went home with a consolation prize of D15, 000.

Football sponsored the prizes of the tournament ranging from the best goalkeeper award, to the man of the final award, the most promising local coach award, and the leading goal-scorer award, Pointsport understands.

They are the only team from Lamin that did extremely well and ended up winning the league title in spectacular style. Others exited the tournament in the early stage of the campaign.

Banjulnding last played a final in Lamin Nawetan way back in 1997 when the team was called Tony Tigers.

They patiently waited for fourteen years before making it to another final and ended up losing yet another final against KGH, who beat them 3-1 to claim the top accolade.

This was their second final under the leadership of Coach Ebrima Jatta (GIGGS), the first being another final against Daranka United in the Kombo North Inter Village District tournament played in September 2011.

They lost in their fight to claim the top honor with a penalty shootout defeat to Daranka United in the process.