Alagie Kassama, acting Sheriff Bailiff at the Kanifing Magistrates’ Court, was cross-examined by lawyer Gomez on 13 April 2016, in the case involving Sanju Kumar, who was charged with stealing a motor vehicle.

This followed the end of Mr Kassama’s testimony before Magistrate Abeke.

Under cross-examination, lawyer Gomez asked Mr Kassama whether the accused had informed him that she was an employee of Copri Road Construction Company, and Kassama said he could not remember.

It was put to him that the accused had informed him and his colleague, Dodou Ndow, that her frustration was brought about by her employer, Copri, which failed to pay her monthly salary which amounted to US$24,000.

Kassama in reply said the accused told him she sold the vehicle out of frustration.

It was also put to Mr Kassama that the accused also told him in the presence of his colleague, that she was left with no money absolutely, and she had to provide for her daughter in terms of basic necessities of life and school fees, and that her daughter was present.

Again, Kassama told the court that the accused told him that she sold the vehicle out of frustration.

He was also asked whether the accused explained to him, as a mother, after she said she sold the vehicle because she had to take care of her daughter and other necessities of life.

Mr Kassama answered in the positive.

He was again challenged to say whether it was true that the accused informed him that, at the initial stage Copri Company allocated the said vehicle to her to perform her duties towards the company, and he said she did not tell him that.

It was put to him that in doing so, the accused was allocated a driver who led them to the accused.

Kassama replied that it was the driver who led them to the accused person’s compound.

Lawyer Gomez again put it to him that it was true that the accused told him that she sold the vehicle for D100,000 to an unknown Senegalese. Mr Kassama said she did tell him that.

“And was it not for this reason that she cannot produce the vehicle, and hand it over to you?”

“Yes, it was sold to a Senegalese as narrated by the accused,” Mr Kassama confirmed.

The case was subsequently adjourned for 25 April 2016, for the prosecutor, ASP Singhateh, to call another witness. 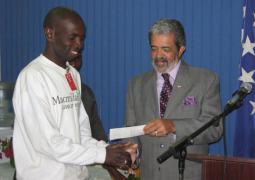