Justice Minister Abubabcarr Marie Tambedou has called on the Gambia Bar Association to collectively join him and the Ministry of Justice in restoring public confidence in the Justice delivery system.

According to the new Justice minister, restoring public confidence in the justice delivery system is uppermost on his mind.

He was addressing members of the Gambia Bar Association yesterday at Court Number one room at the High Court complex in Banjul.

The meeting gave members of the Bar association the opportunity to welcome the new minister, as well as have a one-on-one discussion with him with regard to the dispensation of justice and related issues in The Gambia.

The members of the bar described the meeting as one they had never witnessed over the past two decades.

“It is our collective responsibility. I look forward to your personal and professional support in achieving this,” he said.

He said the Gambia government recognizes the leadership role the Gambia Bar Association played in ensuring that the democratic will of the Gambian people was respected.

These demonstrated the crucial and leadership role that the Gambia Bar Association must continue to play in order to consolidate the democratic gains made so far, and it has a moral responsibility to do so, he added.

“I invite the Bar to take ownership of the law reform process, particularly reform of the criminal justice system, and to submit proposals for consideration by the ministry.”

This could be in a comprehensive paper on the various options open to the ministry for engaging the Bar in this process, and the Bar must take advantage of this window of opportunity and identify the roles that envisage the private bar in the law reform process.

The new Justice minister added: “We all share one common objective, and that is to ensure ‘timely’ delivery of justice in every case.

“But while every effort shall be made to ensure timely delivery of justice, I once heard senior counsel SBS Janneh saying that even though we all tend to believe that justice delayed is justice denied, sometimes justice has to be delayed so that it will not be denied.”

The justice minister further stated: “I am aware that there is a lot of desire to see things operate in the way they should in a functional democracy. I share that desire very strongly, but I also urge you to exercise patience and understanding. This is a journey of fundamental reforms which will target the root causes of the challenges we now face in our justice system.”

He called upon each and every one to embrace the challenge of their generation thrust upon them by the demands of their time.

“Let us show the world that we have some of the most qualified and competent lawyers capable of taking care of our own business for our own justice system in our own country.

“Let us make this change a meaningful one for all of us, otherwise we shall have no justification to complain if we fail to answer the call to national duty when assistance is sought elsewhere. So let us help ourselves and spare our people the agony of having others decide their fate.”

Also speaking was senior counsel Surahata Janneh, doyen of the Bar, who said for the past 22 years he had not seen an Attorney General coming to address the Bar soon after his appointment.

“You need to be reminded that we have in the past foreign Chief Justices, numerous foreign judges and magistrates. The Judiciary of the Gambia had been owned by foreigners,” he said.

It has been on the internet and everywhere that the Supreme Court could not be constituted due to the fact that all those appointed are foreigners which, he said, was shocking to him, as if the Gambia Bar is not capable of providing judges.

Senior counsel A.N.D. Bensouda, said for the past two decades the county’s jurisprudence had been lost as to who they are as a people.

All the judgments delivered had been lost, and now they have citations from the Nigerian cases, adding that there is a lot that needs to be done on that.

“I would like to assure you of our support,” she added.

Also speaking was senior counsel A.A.B. Gaye, who said that the Justice minister was attending the meeting with the Bar was very significant, as in past years they hardly have an Attorney General come to their meetings.

“We were perceived as anti-government; that is why the AG does not attend our meetings. We also expect that you will not be stolen from us by the executive. You are a lawyer, and we expect you to remain a lawyer and a leader of both the public and private bar.” 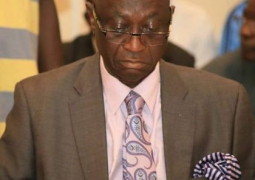