The former NIA operatives were first arraigned before former Magistrate Moses Richards of the Kanifing Magistrates' Court on 11th October 2004 and charged with three counts of stealing, abuse of office and criminal trespass.

The particulars of the offence on count one stated that on or about the 23rd June 2003, in Room F15 at Senegambia Beach Hotel, the accused persons stole from one German national, Dr. Frank Mahler, the sum of $205,600, D1,100, a Siemen mobile phone and eight diamond stones.

Count two indicated that the accused persons on 28th June 2003, at Senegambia Beach Hotel, being employed in the public service by the NIA, abused the authority of their office and carried out arbitrary acts prejudicial to the rights of Dr. Frank Mahler and Niklas Westphal.

The particulars on count three went on to state that the accused persons on  23rd June 2003, at Senegambia Beach Hotel, entered a property in the possession of another with the intent thereby to intimidate two German nationals, Dr. Frank Mahler and Niklas Westphal.

All the accused persons denied the charges.

The state called witnesses to prove their case, among them lawyer Borry Touray.

Former magistrates Kebba Sanyang, Buba Jawo, Sainabou Wadda-Ceesay, Ikpala, Kayode have all at one time presided over the case.

The accused persons were represented by lawyers Antouman Gaye, Chime and Lamin Jobarteh.

The defence counsel at the end of the testimony of the prosecution witnesses filed a no-case-to-answer submission before Sainabou Wadda-Ceesay, who later ruled that the prosecution had established a prima facie case, and asked the accused persons to enter into their defence.

The case has finally reached judgment stage before Principal Magistrate F.L. Drammeh, who is expected to deliver her verdict as scheduled. 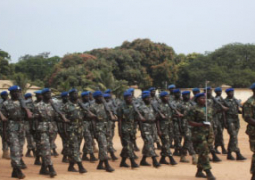