"Do not judge, or you will be judged." (Matthew 7:1) When our Lord Jesus pronounced these words, He was prescribing a way of conduct for his followers and listeners, thus condemning a habit prevalent in his days. The Pharisees, Sadducees and Scribes thought so highly of themselves and had a word for everyone except themselves.

When we blame, condemn, criticize or disapprove of someone's behaviour, mannerisms, habits, character or trait we are knowingly or unknowingly doing injustice to that person. In short, we are judging and are being critical. Such unsavoury remarks hurt. It is like stabbing that person in the back and running him or her down.

Paul recommends that we should quit this habit of judging; it is none of our business. "Who are you to judge someone's servants? To his own master he stands or falls. And he will stand, for the Lord." (Romans 14:4) For much of the time we do not have the facts to make a good judgement so we end up judging by mere appearances.

It was the case with Noah as he worked diligently and painstakingly on the ark project. Those who did not have a clue, saw only the start of madness as the sole motive. The apostle Paul warns "You, therefore, have no excuse, you who pass judgement on someone else, for at whatever point you judge the other, you are condemning yourself, because you who pass judgement do the same things." (Romans 2:1)

We live in a world that delights in criticising others; deriving great satisfaction from saying unpleasant things about our enemies, opponents; friends and loved-ones are not spared. It was an entrenched practice in Jesus' time as we will see from the number of times he was himself a target.

During His earthly ministry, our Lord Jesus was not spared of criticisms, sometimes bitter and outrageous. They came from all directions even from His family which declared Him out of His senses, meaning He had lost His mind. (Mark 3:21) They could not understand why he did the things he did, was never home, always seeking the interest of the poor and needy. So they branded Him a madman. The Pharisees went to the extreme when they said of Him; "He is possessed by Beelzebub! By the prince of demons He is driving out demons." (Mark 3:22) According to them Jesus had a demoniac spirit in Him therefore he was able to drive away demons.

At one time they sought to bring Him down with the comment; "Isn't this the carpenter? Isn't this Mary's son and the brother of James, Joseph, Judas and Simon? Are not his sisters here with us?" They had tried every other thing and it did not work and so they resorted to socially degrading him. How can a mere carpenter get such intelligence to be able to teach these things? "Where did this man get these things? they asked. What's this wisdom that has been given to him, that he even does miracles?" (Mark 6:2)

That is how it will be with you when people cannot come to terms with any development that has characterised your life; when they do not know the source of the power in you - all because you grew up together. They are still picturing you in your diapers - that boy or girl in the neighbourhood who is now putting up airs?

The misunderstanding Jesus experienced with this group of self-conceited leaders became manifest in a series of incidents that run like a thread through the New Testament. They became critical of him because he hung out with sinners. In their thinking they figured out that if Jesus was a man of God he should have discerned that Levi who had invited him to his house was a rogue and a sinner? "While Jesus was having dinner at Levi's house, many tax collectors and 'sinners' were eating with him (Jesus) and his disciples, for they were many who followed him. When the teachers of the law who were Pharisees saw him eating with the 'sinners' and tax collectors, they asked his disciples: why does he eat with tax collectors and 'sinners'?"

Our Lord Jesus came to seek and to save those who were lost. He said: "It is not the healthy who need a doctor, but the sick.I have not come to call the righteous, but sinners." (Matthew 9:12) What better place else should he be but with sinners? A similar contact and desire to transform people led him to meet with Zacchaeus who welcomed him gladly to his house. "All the people saw this and began to mutter, "He has gone to be the guest of a 'sinner'." (Luke 9:7)

They judged Jesus even as he hung on the cross in agony. Passers-by mocked him saying: "He saved others; let him save himself if he is the Christ of God, the chosen One." (Luke 23:35) "Those who passed by hurled insults at him, shaking their heads and saying, 'So! You are who are going to destroy the temple and build it in three days, come down from the cross and save yourself." (Mark 15:29-30)

When was the last time you uttered a kind word to someone? Can you remember making a compliment to a friend, member of your family or even a stranger? How was it received? Each time you say a kind word, remember you are building up and not pulling down. You are helping someone to stand and not to fall. It is not so when we criticize and say negative things that hurt, slander, spread rumours.

"There is only one Lawgiver and Judge, the one who is able to save and destroy: But you who are you to judge your neighbour?" (James 4:12) 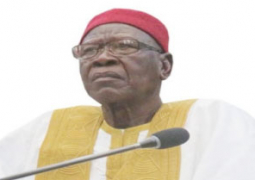