In yet another manifestation of its continuous support to the development of education in the country, Jolly Riders Foundation last week donated 303 bicycles to three schools across the country.

This latest donation brings to 6600, the total number of bicycles donated by Jolly Riders Foundation to Gambian schools since year 2006.

The beneficiaries included Njaba Kunda in the North Bank Region, Niani in Central River Region and Fatoto in the Upper River Region with 101 bicycles each.

Speaking at the handing over ceremony, Mr. Baboucarr Boyo Touray, the Director of Jolly Riders Foundation in The Gambia said the gesture would be a continuous process as long as the communities need their support.

According to him, the sky is the limit of their support to their future development aspirations.

Mr. Touray assured Gambians of their support to school, as far as access to education is concerned. He called on parents, teachers and the communities to support in their quest to make their dreams come true.

Mr. Paul Ryder, a member of the trustee expressed his delight in Gambians for accepting Jolly Riders gift and support to quality and access to education. He said that they still have a lot to do according to a survey conducted in the country. As he put it, at least another 50,000 bicycles are needed to meet the demand for bicycles in Gambian schools.

Mr. Demba Darboe, the Director of Services at the Ministry of Basic and Secondary Education called on Jolly Riders to keep up the good job. He said even the President is aware of their gesture and that every Gambian is proud of them.

He added that this will complement government's efforts to meet the targets of 2015 in having quality and accessible education throughout the country. He tasked the schools to judiciously disseminate the bicycles to deserving students, regardless of anything.

For his part, the Principal of Gunjur Upper Basic School, Mr. Michael Gibba called for effective safety precaution on the busy roads. He also reminded the people that the bicycles belong to the schools and are only for school usage and not otherwise.

Mr. Sheriff K. Kanyi, the Principal of Njaba Kunda Upper Basic and delivered the vote of thanks. 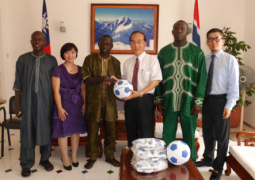