Passion belongs to the Christian patrimony. Feelings or passion are emotions or movements of the sensitive appetite that incline man to act or not to act is regard to something felt or imagined to be good or evil.

Passions are natural components of the human psyche; they form the passageway and ensure the connection between the life of the senses and the life of the mind. Our Lord called man's heart the source from which the passions spring. Christ's passion therefore becomes our passion as we see Him suffer after going to . Panorama tells you more.

Jesus fasting ended after forty days and forty nights in the wilderness. The devil played with Him but he resisted it to the end. When Jesus left the wilderness He asked His apostles to go to the town and take a colt that has never been used by anyone. "But what shall we tell the owner?" One of them asked their Master. Tell them the Master is in need of it. It was a victory walk and had the chance to see those who love Him.

God knew His plans for Jesus. The people at that time were ready to welcome Him. They cut palm branches, spread their clothes to let Jesus walk on to pass as their King. They raised the palm branches and let Jesus walk on them. They all shouted "Hosanna in the Highest to the King. Hosanna! Hosanna! Hosanna!"  Those who did not want Jesus' kingship felt He came to overthrow their king but Jesus did not think about politics. He says, "My kingship is not of this world."

Jesus' triumphant entry shook the whole as He came in triumphantly to start His mission that is passion and death. The bystanders had mixed feelings and others among them who had love Jesus stood out right and shouted above their voices. Meanwhile others were standing and waiting to just take Jesus to be tried by Pilate who even washed his hands to say he had no hands in Jesus' death.

In themselves passions are neither good nor evil. They are morally qualified only to the extent that they effectively engage reason and will.

Passions are said to be voluntary, "either because they are commanded by the will or because the will does not place obstacles in their way."

Jesus' passion became bad because He was a genuine man having good reasons to guide the world to His Father in Heaven but yet they killed Him on a cross, dying a shameful death like a criminal.

It is a passion that is close to the heart that invites critical thinking of ones own life that is full of love for the Man who suffered death under Pontius Pilate but rose immediately after three days.

Death did not have hold on Him because He was above death. He was able to wake His dead friend, Lazarus. What a joy!

Strong feelings are not decisive for the morality or the holiness of persons. They are simply the inexhaustible reservoir of images and affections in which the moral life is expressed. Passions are morally good they contribute to a good action, evil in the opposite case. The upright will order the movements of the senses.

In the Christian life, the Holy Spirit himself accomplishes his work by mobilising the whole being, with all its sorrows, fears and sadness, as is visible in the Lord's agony and passion. In Christ human feelings are able to reach their consummation in charity and divine beatitude.

Moral perfection consists in man's being moved to the good not by his will alone, but also by his sensitive appetite, as in the words of the Psalm: "My heart and flesh sing for joy to the living God."

The term passion in our day refers to sorrowful passion that affects deep within the individual. These could be tough for the individual because it encompasses insults, beat hatred, suffering, betrayal and many vices.

It affected our Lord because we feel with Him, although He was God, but has the nature of man at the same time. God left nature to take its cause, thus not interfering to stop the hypocrites from trapping Jesus and taken to Pilate.

Today, there are many passions the followers of Christ would go through. Their temptations are rife and some would go into their deserts to follow the steps of Jesus. Temptations apart from the Lenten Season come in abundance, but man has not relented to doing the wrong thing. God's message is not doing much to convince people of the vices that they engage in. God's message is Good news to our lives, but it is now taken as nothing. Where it is said "thou shall not kill", people would do it and bear the earthly consequences and also wait for the eternal consequences that is not known.

Man has taken stubbornness and hardened their hearts to the truth that sets man free.

Our passion will come unabated especially when we have the negative in our lives and think of God only when misfortune strikes - when people believe in God and pray for forgiveness.

But outside of that many are left to think that it is ok to be otherwise. Man creates his own passion while he is not ready for the consequences. Unlike Jesus, He did not create his passion but was created by others.

28th March is Passion Sunday all Christians will go with palms in their hands to say 'Hosanna' to their King at the same time pray for the atonement of their sins. The passion of Jesus is a symbol of the life we live, full of sorrow and pain. Have a blessed Palm Sunday. 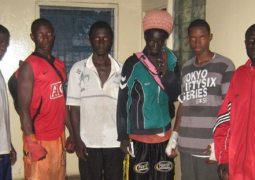