Landing Sawaneh scored the only goal in Friday's final for Jatta's FC in the 44th minute of the game from a spectacular free kick when Sanna Bojang handed the ball at the edge of s 18-yard box.

Jatta's FC, winners of the competition, went home with a trophy and a cash prize of D10,000, while the runners up, , received a consolation prize of D8,000.

On Saturday at the Serrekunda West Mini-stadium, Bundas FC beat Unicorns FC 3-0 in the re-play final of the Seaview sponsored Knockout championship.

Alieu Danso opened the score line for Bundas FC in the 31st minute of the game from a sensible finisher after capitalising on Ababacarr Sambou's corner kick when Unicorns FC failed to clear their line.

Two minutes later, Unicorns FC were reduced to ten men when Sambujang Touray was sent off after been shown a second bookable offence.

Ababacarr Sambou scored the second  for Bundas FC in the 51st minute of the game from a penalty spot when defender Sheriff Kujabi made a handball inside Unicorns FC eighteen yard box.

Things when from bad to worst for Unicorns FC when striker Jabel Mbenga was shown a straight red card for protesting against central referee Sheriff Njie's decision of awarding Bundas FC a penalty.

Bundas FC were also reduced to ten men in the 70th minute of the game when Muhammeh Saidy was shown his matching orders.

Saibou Gassama sealed the victory for Bundas FC in the 82nd minute of the game from a wonderful finisher.

Bundas FC, the winners went home with a cash prize of D15, 000 and a trophy while Unicorns FC, the runners up received a cash prize D10, 000. 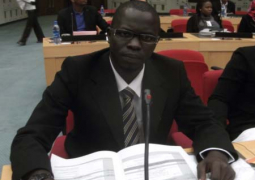