Westfield Clinic in Serekunda is to benefit from supply of medical equipment courtesy of the Japanese Grant Assistance for grassroots human security project.

The project was launched in The Gambia on Tuesday and Hideya Sato, first secretary at the Embassy of Japan in Senegal, said it is part of Japan’s new strategy on global health diplomacy.

Speaking at the inauguration of the project held at Westfield Clinic, Mr Sato said the project represents Japan’s development cooperation initiative in the health sector.

He noted that the government of Japan has contributed to the development of the health sector in The Gambia in order to improve the living conditions of the population.

In 2015, Japan launched a project to support the National Ebola Prevention and Preparedness in The Gambia that is planned and implemented by UNDP through Japanese financial contribution amounting US$1,600,000.

In addition, the Japanese embassy offered US$78,000 to the Ministry of Health for installing three thermography equipment at Banjul International Airport.

Mr Sato said through the project, the government of Japan offers 73,314 Euros to Westfield Clinic to introduce blood test equipment and six other medical machines.

He said that the project comes against the backdrop of “a dramatic increase” in the number of people suffering from non-communicable disease such as diabetes and hypertension in The Gambia.

Sheriff Tambadou, chairman, board of trustees of Westfield Clinic, said the board is grateful to the government and people of Japan for the grant assistance for grassroots human security project.

The project supports local non- profit organisations to implement small-scale projects that directly benefit communities and contribute to the socio-economic development of The Gambia.

Mr Tambadou said the project would help the clinic to set up a point of care laboratory to do quick and easy on-the-spot testing which will help in diagnosing emergencies quickly and monitor patients with chronic illnesses, especially diabetes and hypertension better. 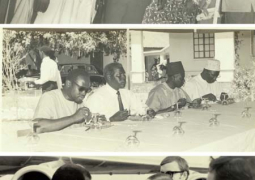