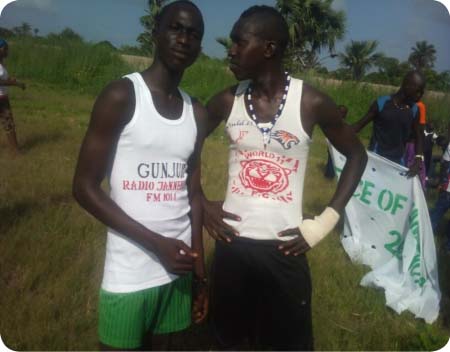 Gunjur Radio Station Jannehkoto FM will clash with Association of Gunjur Youth for Community Development (AGYCOD) in a friendly game set for New Year’s Day at the Gunjur Nyamina Football Field at 9am.

The friendly is meant to foster unity and understanding between the two institutions.

Abdoulie Janneh and Dj Balaka will lead the attacking force of Gunjur Radio Jannehkoto FM while DJ Solid and DJ Mighty General will be playing in the midfield.

DJ Melo, Modou Janneh, MC Joj and Matarr Jabang will be playing in the four back positions, while Youngest Alagie Musa Darboe will be in goal.

AGYCOD also has some brilliant players in their team, such as Nuha Barrow, Kanbakary Janneh, Kemo Jammeh and Jamai Janneh, who are absolutely clinical in front of goal.