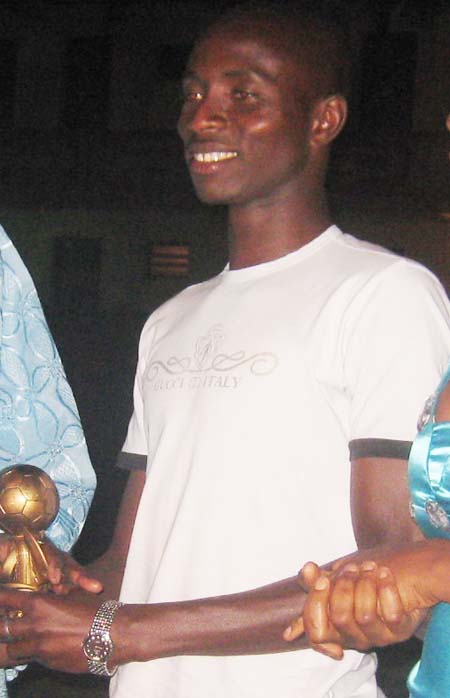 Jane Joof won himself the best coach and manager of the season with Lamin Sarjo Samateh emerging as winner of the title, Player of the season 2009, at the Paradise FM premises on Friday.

Speaking at the ceremony, Ousman Jarju, the Director of Mediamatics said that whatever their contribution in sports within the Gambia is they would do it, because after all, one deserves a pat on the back after a job well-done. "Basically, it is recognising talent and appreciating it," he added.

Kebba Ceesay, the Gambia Football Association's Technical Director, spoke on behalf of Seedy Kinteh. He said that his department wants to push sports to the higher height, as far as The Gambia is concerned, and motivate the players.

"Our department has a keen interest in honouring coaches and we cannot do it alone without the help of the people," he said.

"The Ministry of Youth and Sport in The Gambia believes that people doing sports should be recognised and emulated so that others can follow them," said Mr. Aziz Titawo Mendy, the Development Officer for the National Sport Council.

"Excellence in sports by mass participation is the theme of this year at the Ministry of Youths and Sports and I must commend Paradise Sports for being in line with this policy," he revealed.

Jane Joof won himself the best coach and manager of the season by 418 votes and Lamin Sarjo Samateh, who was the leading goal scorer of the GFA with 10 goals, won 317 votes, thus earning himself the title Player of the Season 2009. Samateh was also the winner of the Sports Journalists Association of the Gambia 2009 Player of the Year Award.

"An award like this is always motivating and it reopens a new page in one?s coaching career," said Jane Joof. He thanked Bonu Johnson who was a fellow coach nominee for all his support during his early days in coaching.