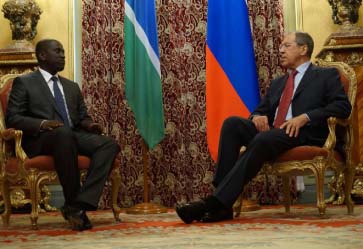 A Gambia government delegation headed by the secretary-general and minister of Presidential Affairs, Momodou Sabally, accompanied by the minister of Foreign Affairs, Mamour Jagne, has “concluded a successful mission” to Russia as special envoys of President Yahya Jammeh.

They were received in Moscow by Russian foreign minister Sergey Lavrov, and “held successful deliberations on all aspects of the bilateral relations from 1994 to date,” according to a press release signed by Minister Sabally.

“This visit has further deepened, expanded and cemented our bilateral relations with Russia in all aspects; a country that has been our strategic ally since 1994,” the release added.