President Yahya Jammeh has assured traditional chief across the country that his government will empower them by all means possible, stressing that, as chiefs, they should be given the law for implementation.

Jammeh was speaking Tuesday afternoon when chiefs from across the country led by paramount chief Demba Sanyang called on him at State House in Banjul.

He promised that it is not only the chiefs who will be given the power, but regional Governors and alkalolus will also be empowered, “so that they can do their work easily without any hindrance.”

The position of chiefs, he stated, should be respected in all forms.

“Your position as chiefs should not be based on your title only, but you must have authority over the people you are serving, because Gambia belongs to all of us and, for us to develop The Gambia, we need to come together,” he said.

According to the Gambian leader, people should have confidence in chiefs, noting that such meetings between the chiefs and his office is necessary.

He told the traditional chiefs that in future, they should have one or two meetings with him so that he (Jammeh) will know their problems before embarking on a country-wide tour.

He also implored the chiefs to be organizing retreats, noting that government will give them the financial support.

“When you go back to your various districts, discuss this with your Alkalolus and any Alkalo who undermines you on this will be sacked because this is not about politics. But also do not give trouble to any Alkalo on this because you have a personal problem with him or her,” Jammeh told the chiefs.

Noting that as Gambians, we must be proud of ourselves, President Jammeh emphasized that anybody in The Gambia who wants to follow laws in the West must go to the West.

“I’m not saying about other parts of Africa, but for us here in The Gambia, nobody will rule us,” he emphasized.

The vice president and minister of Women’s Affairs, Isatou Njie-Saidy, said no development can take place in the country without the involvement of the chiefs.

Speaking on behalf of fellow chiefs in the country, Alhagie Ebrima Tamba Jammeh, chief of Illiassa district, commended the Gambian leader on behalf of all the chiefs for his foresight towards the development of the country. 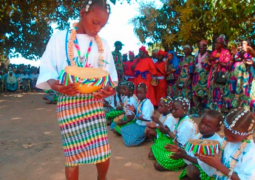 NSC briefs press prior to May Day Sports