President Yahya Jammeh has used his address to the 68th General Assembly of the United Nations to reiterate yet again his zero tolerance for homosexuality, warning the UN General Assembly that gays were a threat to human existence.

In his address on Friday, which lasted over 20 minutes, President Jammeh, known for his tough stance against homosexuality over the years, said that homosexuality, greed and obsession with world domination, ‘‘are more deadly than all natural disasters put together.’’

“Today, after fighting for our freedom and developing our continent we are being prescribed a new religion - Democracy, human rights and good governance,” Jammeh said.

“We know for a fact that all living things need to reproduce for posterity. They become extinct when they can no longer reproduce. Therefore, you will all agree with me that any path in promoting the end of human reproduction must be promoting human extinction.”

“Could this be called promoting human rights when you advocate for a definitive end for human reproduction and procreation? Those who promote homosexuality want to put an end to human existence. It is becoming an epidemic, and we Muslims and Africans will fight to end this behavior in our countries. We will never accept this.”

According to him, those who promote homosexuality want to put an end to human existence, noting that it is becoming an epidemic and we Muslims and Africans will fight to end this behavior.

‘‘Homosexuality in all its forms and manifestations which, though very evil, anti-human as well as anti-Allah, is being promoted as a human right by some powers,’’ told the gathering of world leaders in New York.

Jammeh’s words came only a day after close to a dozen foreign ministers and other UN representatives - including the UN High Commissioner for Human Rights - called on all members of the UN to put an “urgent end” to LGBT discrimination and violence.

The United States, France, Argentina, Japan, Brazil and other countries urged the 193-members of the United Nations on Thursday to repeal laws that discriminate against lesbian, gay, bisexual and transgender people, who are victims of widespread rights abuses.

Turning on the United Nations Security Council, Jammeh warned that Africa will rise up against the odds if its quest for justice and equality at the world’s most diverse body is not heeded.

‘‘Mr President, as we gather for the 68th summit of our organization, we must pause and take stock of our collective record in responding to the many different global challenges that mankind has to grapple with. Our global body the United Nations has indeed adopted complex resolutions which if implemented to the letter would have made the world a much better place for the whole of mankind and indeed for all other creatures of our planet,’’ he stated.

According to him, civil strife and terrorism caused by the negative behaviour of some world powers are undermining human security and even the viability of states.

“Poverty, hunger and diseases still decimate countless communities, while our capacity to respond to these man-made humanitarian crises remains discriminatory and inadequate” he said.

“The tragedy unfolding in Syria has become a scar on our conscience as a civilised people and this war must be stopped by all means necessary. All that we hear is the talk about chemical weapons and the need to ensure that they are not used by anyone.

“This does not make any sense as long as this barbaric war has not come to an end immediately. Whether chemical weapons are used or not thousands of people would continue to die in the most horrific manner. It is the same horrific and senseless death and our duty is not to choose what form of death is acceptable and what not. Our duty is to stop the senseless and barbaric killings in Syria. We as the UN must end this war immediately otherwise the people of Syria would continue to perish at the hands of these satanic barbaric forces,” Jammeh stated.

He called on the UN Security Council and all the powers behind the war in Syria to not only prevent the use of chemical weapons, but they must also bring this brutal war to an immediate end without preconditions.

The Syria war, he went on, must be stopped and stopped now!, while calling for an assessment of the strengths and weaknesses of the United Nations which, he said, has been incapacitated by the actions of some member states. 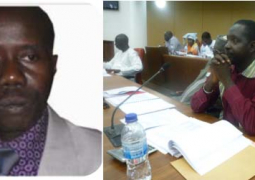