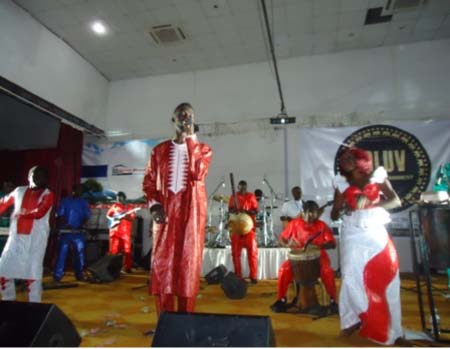 Hit songs in the album are ‘Jarabi’, ‘Alalakay,’ and ‘Bintang Bolongdala’. Its executive producer is Saul Sowe of Joluv Arts Entertainment.

The album was recorded at Raam Daan Studio in Senegal and mixed and mastered by Papis Ndiaye and Ouzin Ndoye.

The launching was presented by Joluv Arts Entertainment and backed by the Holy Family Band.

Mr Saul Sowe, Chief Executive Officer of Joluv Arts Entertainment, told journalists the launching was a success thanks to stakeholders who contributed immensely towards the event. He commended President Yahya Jammeh for his support.

According to him, Joluv Arts Entertainment has been operating for the past fifteen years and have now rebranded it with his colleagues working with Gambian artistes.

“We recently signed Mandingmorry and we are still scouting Gambian artistes to be in Joluv Arts, because we believe that they can do it if coached properly,” he said.

Singer, songwriter and instrumentalist Jali Madi is a sensation in the Gambian and world music.

He defies any easy singing bridge.  By turns, he picks an acoustic guitar to accompany his ballads, sings an inspirational song about modern life, plays a sweet Mandingo melody on guitar, swings a hot dance numbers, and then reaches deep for a soulful expression of values in a troubled world.

He tops it all with a Kora tune or old Kuyateh Griot family song -- all skillfully blended into a seamless flow.  A mainstay on the Jaliya traditional music circuit these past years, Jali Madi has collaborated with numerous artistes in The Gambia and performed in concerts with such Senegambia Mbalax and Manding music stars such as Jaliba Kuyateh, Vivian, Thione Seck Djibi Drammeh.