The criminal trial of impersonating a public officer involving David Fulton, a British national who is currently serving a one-year mandatory jail term for seditious publication and three years for forgery, failed to proceed yesterday at the Banjul Magistrates' Court.

Mr David Fulton, a British national, is currently standing trial before Magistrate Lamin George on a charge of impersonating a public officer by wearing a military uniform. He denied the charge.

Police prosecutor, Sgt Fatty, told the court that the prosecution was not in a position to open their case due to the fact that a material police witness was currently deployed to the Upper River Region. He said arrangements had been made to secure his presence in court and therefore applied for a fortnight's adjournment.

In response defence counsel Lamin Camara told the court that he was just coming to the case, but not withstanding he vehemently objected to the application for adjournment. He said The Gambia is too small to take a person a whole fortnight to travel from Basse to . He added that the case had been adjourned for almost two weeks and that availed enough time for the prosecution to prepare his witnesses. 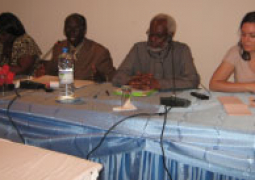