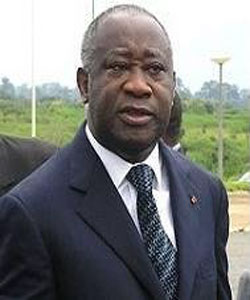 The President of the Republic of Ivory Coast, His Excellency Lorent Gbagbo, is currently in The Gambia on a private visit, reports monitored over GRTS revealed.

President Gbago was received upon arrival at Banjul International Airport yesterday by the Vice President of the republic of The Gambia, Madam Isatou Njie Saidy, Speaker of the National Assembly, Chief Justice and Secretaries of States.

Speaking to reporters on his arrival, President Gbagbo said that he is in the country for vacation, citing the sunshine and hospitality of the Gambian people as the elements of attraction.

Five men charged with being in possession of suspected stolen property