Capitalism did not originate in the Islamic world as it came into being only after the invention of the machine which took place by change in Europe.

Capitalism was imported into Islamic world at a time when it was under European domination. Together with the wave of development, it spread into the Islamic world which suffered from people think that Islam approves of capitalism, with both its evils and merits. They also claim that there are no provisions in the Islamic law or regulations such as might be in conflict with capitalism. They argue that as Islam permitted individual ownership it must likewise permit capitalism.

In answer to this accusation it might suffice to point out that capitalism cannot prosper or grow without usury and monopoly both of which were prohibited by Islam about one thousand years before the existence of capitalism.

But let us tackle the question at some greater length. If the invention of the machine had taken place in the Islamic world, how would Islam have faced the economic development resulting from such invention? How much would Islamic legislations and laws have organized work and production?

There is consensus of opinion among economists-including those who are opposed to capitalism e.g., Karl Marx-that capitalism at the start brought out great progress and rendered considerable services to humanity. Production was increased; means of communications were improved and national resources were exploited on a larger scale. The standard of living among the working classes became higher than when they were mostly or completely dependent on agriculture.

But such a glorious picture did not last long because the natural development of capitalism, as they say, led to the amassing of wealth in the hands of capitalist owners and to a relative diminution of the properties owned by the working classes. This enabled the capitalist owners to use workmen-the real producers in communist eyes-in considerably stepping up the production of various commodities but the wages paid to workmen were too low to ensure decent life because the employers took all the profits and spent them leading a life of luxury and corruption.

Besides this the scanty wages paid to workmen did not enable them to consume all the production of capitalist countries. This led to the accumulation of surplus production. As a result of this the capitalist countries began to look for new markets for their surplus productions, which in turn gave rise to colonialism with all its incessant conflicts among different nations over markets and raw material resources. Destructive wars were the inevitable outcome of all this.

Moreover, the capitalist’s system is also exported to periodic crisis resulting for dipration caused by low wages and the scantiness of world consumption in relation to increasing production.

Some propagandists’ materialism refers all the problems of the capitalist system to the nature of capital itself rather than to any ill-will or desire for exploitation on the part of the capitalists. Such native and strange reasoning means that man with all his emotions and thoughts is but a helpless creature in the face of the power of economy.

There is no doubt that Islam would have encouraged the good and progressive achievements that were brought about by capitalism in its early stage. But Islam would not have left capitalism without legislation to organize it and to preclude any exploitation which might result from ill-will on the part the employers or from the very nature of capital. The Islamic principle which was laid in this respect entitles the workmen to share the profit with their employers. Some Maliki jurisprudents went so far as to give to the employee an equal share in the profit. The employer provides all capital and the workman does the work; the two efforts are equal and accordingly they are entitled to an equal share in the profit.

The above-mentioned principle illustrates Islam’s great concern with the establishment of justice. Such concern for the establishment of justice was voluntarily introduced by Islam. It was not forced thereon by any economic exigency nor was it the result of the struggle among classes which is regarded by the propagandists of certain economic doctrines as the sole effective factor in the development of economic relations.

In the beginning, industry consisted of simple manual word involving a small number of workmen who worked in simple workshops. The above-mentioned principle would have organized the relation between work and capital on an equitable basis such as Europe had never had.

Economists say that the development of capitalism from its early benevolent phase to its present morbidly evil phase was accompanied by its increasing dependence on national loan. This led to the creation of banks which carried on financial operations and advanced loans in return for some interest. Without that such loans as well as the majority of banking operations are based on usury which is expressly prohibited by Islam.

On the other hand, tough competition, which is another feature of capitalism, leads to the destruction of minor companies or to their merger into major ones. This encourages monopoly which is also prohibited by Islam, as is borne out by some sayings of the Prophet. He said: “He that monopolizes is a wrong-doer”. Because Islam prohibits usury and monopoly it would have been impossible for capitalism to develop under Islam into its present evil stage which involves exploitation, colonialism and war.

What would have been the fate of industry if it had originated under Islamic rule?

Surely Islam would not have restricted industry to minor workshops whose profit is shared by the employer and the workman. Production would have rather grown but the relationship between the employer and workmen would have developed on different lines from those outlining the development of the employer-employee relations in Europe in the nineteenth and twentieth centuries. It would have developed in accordance with the basic principles of Islam such as the above-mentioned principle which provides for an equal division of profit between the workmen and their employer.

By so doing Islam would have avoided resorting to usury or monopoly and would have precluded the injustice to which workmen are subjected under capitalism where they are exploited and left to suffer poverty and humiliation.

It would be foolish to suggest that Islam could not have established such justice without first passing through hard ordeals, class conflicts and economic pressures which would ultimately lead to the amendment of its legislations. It is proved beyond all doubt that Islam had been ahead of all nations in dealing with the questions of slavery, feudalism and early capitalism. In so doing Islam was not acting under any outside pressure whatsoever. It was rather acting voluntarily and in accordance with its own conception of eternal equity and justice scoffed at by communism state, itself passed directly from feudalism to communism without passing through the intermediary stage of capitalism. In this way Russia-which adopted the doctrine of Kari Marx-practically, gives the lie to Marx’s theory regarding the phases of development which, he says, every state has to experience.

As to colonialism, wars and exploitation of peoples, it should be pointed out that Islam is firmly opposed to all these as well as to all the other universal evils engendered by capitalism. It is not one of the principles of Islam to colonies other peoples or to wage any war against others for the purposes of exploitation. The only war approved by Islam is that which is waged against aggression or is meant to spread the Word of God where its peaceful dissemination is rendered impossible.
To be continued. 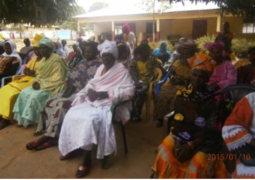