Isatou Nyang has been voted the 2010 Sports Journalists Association of the Gambia Paralympics Player of the year during a July 2nd national Sports Award staged by the association.

She swept home this accolade from fellow contenders Demba Jarju and Malang Tamba who are also nominees for the title.

Isatou is the only sport woman to have win an award during the 2010 SJAG award making her a solid athlete.

She trains four times a week and is one of the best female basketball player and wheelchair athletics in the country. She was chosen as a role model as she can compete any where any time and can deliver to expectation, her wish and ambition is to be a professional sportswoman and his dream is, one day, to take part in the Paralympics representing the Gambia and showing other people with disabilities in the Gambia that, despite his disability and being a lady.

In 2004 she came out first on 10 kilo meter race organize ISRA. In 2002 she joined the Association and started training wheelchair Basketball and Athletic, she was the only female playing among the boys. 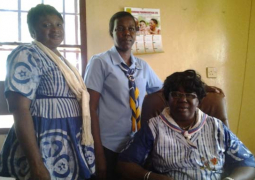