The annual Inter Regional Athletic championship final is slated for tomorrow, Friday 18th February 2011, at the Independence Stadium in Bakau.

The most anticipated and prestigious inter-regional athletics final will give the young athletes opportunity to exhibit their skills and talent, attracted spectators from Bakau and its surrounding areas.

The championship was won by Region two for the past two years and will be hoping to retain the title for the third time in a row but they will face heavy competition from other four regions for the title this year. 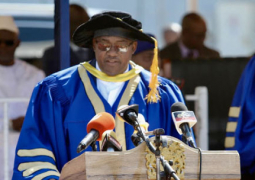 ADDRESS BY HIS EXCELLENCY ADAMA BARROW, PRESIDENT OF THE REPUBLIC OF THE GAMBIA AND THE CHANCELLOR, AT THE 12TH CONVOCATION CEREMONY OF THE UNIVERSITY OF THE GAMBIA