I am not a ‘money-obsessed’ Sarahulleh – courtesy of my social licence of gamo/sanawya; am from Badibu - but I do have a strong desire for riches; and hence when Alhagie Abdoulie Touray asked that my next book be titled Instant Money, I decided to at least do an article on this very interesting and perhaps inspiring title.

Let me start by clarifying that this series of articles is intended to show the way to attaining wealth in the fastest way possible through the rendering of services or sale of goods that are beneficial to people. This is not an invitation to what some people dream of: getting money without rendering any service.  Forget about making money, as Earl Nightingale once said, “The only people who make money, work in the mints.” What I am writing about is the earning of money.

This is not about playing lottery to get quick cash for that is no sustainable way of acquiring wealth. Research has proven that most millionaires who become rich from lottery end up poor and destitute. The desire for money should not lure anyone into illicit acts like selling narcotics for that is the recipe for self-destruction. We have seen the despicable end of drug lords like Pablo Escobar, and nearer home daily people are sent to prison for trading in such destructive vices. It is clear what the script writer once said, “You cannot break the law, you can only break yourself against the law.”

When you seek financial wealth you must have a clear philosophy on how to achieve that goal. Perhaps the most sought after thing in the whole world, money also happens to be the most misunderstood thing/concept, misused and abused by many.

To start with, why do you need money, and why should you want to have lots of it? This question may sound like a nonstarter for some but ironically, it is a question still unanswered by millions of people. Most of us grow up with the wrong financial philosophy as our parents tell us that money is the root of all evil or money is not everything and countless other aphorisms that ingrain in us a loathing of the one thing that we may actually need most in our lives. And while we get miss-schooled on money it still looms large in our conscious and sub-conscious minds. It ironical that those who keep saying that money is not everything are the ones most bothered about cash. Money ceases to be an obsession for those who have accumulated enough of it. Microsoft billionaire Bill Gates is talking less about money than the average person; instead he is busy thinking of how to help the world’s poor and vulnerable.

In my recently published book, Instant Success I wrote at length on the nobility of having a desire for wealth: “Look at money as a tool that will help you to get all the good things you want for yourself and those who you want to help. Question: Can you build a church or mosque in today’s world without money?

Strive to develop a genuine desire for money; go out there and provide useful services and products to others. What you are paid is not that green piece of paper you hold or stack in a bank account, it is the value of useful service you have rendered to others and for this, God will reward you too in the hereafter.”

Leading American Author and self-help guru, Mark Victor Hansen says that his mentor once gave him the following reasons to aspire to be a millionaire: “Do it for the skills you have to learn and the person you have to become. Do it for what you’ll end up knowing about the marketplace, what you’ll learn about the management of time and working with people. Do it for the ability of discovering how to keep your ego in check. For what you have to learn about being benevolent, being kind as well as being strong. What you have to learn about society and business and government and taxes and becoming an accomplished person to reach the status of millionaire.” What great perspective of the beauty of earning money, and once you get that million you can decide to give it all away but the millionaire in you would abide!

A clear vision and a good set of reasons to become wealthy makes the journey to that destination enjoyable and worthwhile. When you set yourself the goal of attaining wealth state the amount of money you want and the timeline by which you would like to earn that money. Keep that vision very clear in your mind’s eye and then generate a mission, a plan, on what good or service you intend to trade to be able to accumulate your desired wealth. Remember there is no such thing as something for nothing, or as the great Economist Milton Friedman once put it, “there is no free lunch”!

With the foregoing background on a philosophy of money, let me explain one key to the acquisition and maintenance of wealth. The first key after nurturing a sound financial philosophy is to develop the habit of saving. Any person who has accumulated wealth has had to habit of saving. And please note the way I express this quality in that I am not only writing about saving but the HABIT of saving. This is why all the great teachers of money generation emphasise this quality because it is not only the amount of money that it accumulates that is important but the HABIT. As the Richest Man in would teach “a part of all I earn is mine to keep”.

The same wise man goes on to specify : “Gold cometh gladly and in increasing quantities to any man who will put by not less than one-tenth of his earnings to create an estate for his future and that of his family”. There is great wisdom in saving at least one tenth of your income no matter how small it may be. As I mentioned earlier it is not only the amount that you accumulate that matters but also the discipline of nurturing the habit of deferred gratification. This is extremely important!

Momodou Sabally is the author of Jangi Jollof: A Memoire on the ’s first University Programme. He just launched his second Book Instant Success:Ten Keys to Personal Achievement. 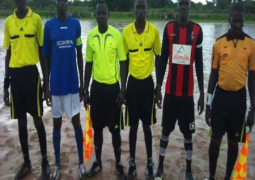