Tamba and Fofana are being tried in connection with the 21 March 2006 aborted coup attempt, and the charges include conspiracy to commit treason, treason and concealment of treason.

In his address, defence counsel Sheriff Tambedou stated that the 1st accused was charged with four counts, and count one was conspiracy.

He submitted that there was no conspiracy in which the 1st accused was involved, and he read the particulars of offence of the said count in court.

Counsel Tambedou submitted that the prosecution has called five witnesses, adding that PW2, PW3, PW4 and PW5 did not mention the name of the 1st accused.

He submitted further that PW2, Lamin Manneh, tendered the cautionary statement of the 1st accused as an exhibit and also referred the court to the evidence of Major Alieu Bah, the first prosecution witness, whom he said did not mention the name of the 1st accused as being part of those who wanted to overthrow the government of The Gambia.

"My lord, I wish to refer this court to the evidence of PW5, and his cautionary statement which was exhibit C, and submit that the court was mislead, because if you read the entire statement of PW5, you would not find the name of the 1st accused therein," defence counsel added.

He explained that PW5 did not mention the name of the 1st accused, and he again referred the court to the evidence of PW1, who said the 1st accused was not a member of the panel.

Counsel further argued that his client's name was not mentioned by any witness other than that of Colonel Ndure Cham, adding that PW1 said Ndure Cham called him in his office and informed him about the coup, and told him that the 1st accused was aware, which according to counsel Tambedou does not amount to conspiracy.

Counsel submitted that exhibit A does not remotely state that the 1st accused was part of the conspiracy, because he was not part of the coup plot.

The defence counsel, therefore, urged the court to dismiss the charge of conspiracy.

He cited section 144 of the Evidence Act 1994, noting that the burden of proving the guilt lies on the prosecution, and urged the court to have regard to section 38 of the CPC.

He added that the accused person cannot be convicted on uncorroborated evidence by one person, submitting that the statement of the 1st accused does not corroborate the evidence of PW1.

Counsel Tambedou stated in his submission that the 1st accused was duty bound to act, both legally and morally, and this was why he called those he trusted and informed them about the coup plot.

Therefore, he went on, count three failed, adding that, because of the action taken by the 1st accused to foil the coup , count 4 also failed.

Counsel elucidated that there is no evidence to corroborate PW1's evidence, who mentioned that he informed the 1st accused that Colonel Ndure Cham wanted to overthrow the government of the through the use of force.

Defence  counsel maintained that the 1st accused was not required to give evidence because there was no evidence against him, and secondly he has sufficiently stated, in exhibit A, how he foiled the coup attempt.

"I urged my lord to dismiss all the charges against him, and to acquit and discharge him accordingly," counsel Tambedou concluded.

The address of lawyer L.K. Mboge, counsel representing Sarjo Fofana, will be in our next publication.

The case was subsequently adjourned to 23 March 2011. 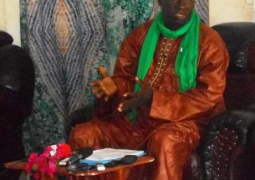