In East qualifiers: One Love advance to final stage

One Love FC have advanced to the final stage of qualifiers of the Serrekunda East Sports Development Organisation (SESDO) thanks to a 5-3 penalty shootout win over TC FC after a goalless draw on regulation time at the Serrekunda East Mini Stadium on Monday 29 July 2013.

One Love FC have now joined the likes of Istanbul FC, Herr FC, Wasulung FC, Ebbeh Gi FC and T.K. Ajax FC, who earlier booked their places to the final round of the qualifiers.

Speaking to Pointsports shortly after the game, Ebrima Baldeh, head coach of One Love FC, expressed confidence that his team will qualify for this year’s Serrekunda East Nawetan proper.

He said they should have won the encounter during the 90 minutes but were unlucky, adding that the game was more difficult than their opening game of the qualifiers because they came from the same area and knew each other.

He said the best of his team was not seen during the encounter but expressed confidence that they would emerge victorious in their final game of the qualifiers and book a place in the Nawetan proper.

He also thanked the fans of the team while promising them a Nawetan proper place this year.

Omar Faye, head coach of TC FC, said he was dissatisfied with the defeat but they have taken it in good faith.

He said their tactics worked well during the game but were just unlucky during the post-match penalty kicks.

He concluded by thanking fans of the club for their support during the qualifiers. 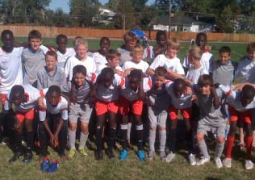