The day is an opportunity to celebrate the fundamental principles of press freedom; to evaluate press freedom, to defend the media from attacks on their independence, and to pay tribute to journalists who have lost their lives in the line of duty.

In a nutshell, without freedom of expression, there is no democracy!

That is why many philosophers argued persuasively that freedom of expression is not only meant for journalists and media workers, but also for every citizen of the globe.

Therefore, citizens need to be empowered by informing them truthfully and impartially. And this is not possible in an atmosphere of mutual suspicion. Specifically, the media fraternity in The Gambia must stay united, because without solidarity it will be difficult to get the job done.

In the spirit of this year’s celebration, we call on the Gambia government to open its doors to all in the private media for access to information, in addition to having them cover state functions as is already the case with some media houses.

It is also important for government officials to attend activities of the Gambia Press Union (GPU), because we are partners in development. If there is any misunderstanding between us, we should sit down and thrash it out to the mutual satisfaction of everybody.

In this regard, we call on the authorities to open a dialogue with the Gambian media fraternity with a view to fostering a cordial relationship between the government and the media community.

We are condemned to live together because we are partners and, as a result, we need each other in the drive towards national development.

One way the government can improve relations with the media community is to repeal draconian press laws that get in the way of press freedom and freedom of expression in the country.

We also find it disturbing that for almost seven years now, the whereabouts of Chief Ebrima B. Manneh is still unknown. His continued disappearance is a smear on the image of this country.

Even more worrisome is the apparent lack of progress in the investigations into the murder of Deyda Hydara on the night of Thursday, 16 December 2004.

We call on the authorities to get independent investigators to get to the bottom of Deyda Hydara’s murder.

With so many challenges threatening to consign the journalist to extinction, it is imperative for Gambia journalists to close ranks and work for our common interests.

In these trying times, we should stay united and resist any attempt to sow seeds of discord among us.

“Freedom is the recognition of necessity.”
Friedrich Engels 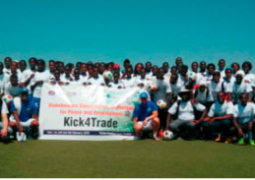