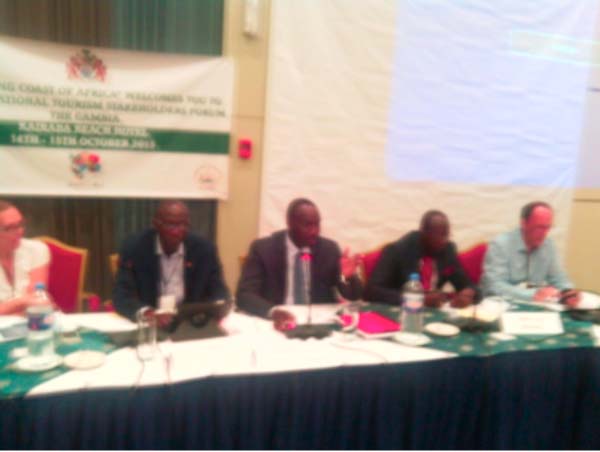 A two-day in-country destination stakeholders forum organized by the Gambia Tourism Board in collaboration with the Ministry of Tourism and Culture, marketing firms, tour operators and stakeholders in the tourism sector ended Thursday at the Kairaba Beach Hotel.

The purpose of the forum was to update the destination stakeholders on key strategic plans of the industry, and some of the initiatives undertaken in an effort to achieve the targeted arrivals numbers.

It was contracted to public relations organisations in the tourism industry and marketing firms to update stakeholders on their marketing and promotional plans vis-à-vis achievements against set key performance indicators, as well as to create the opportunity for all key stakeholders in Destination Gambia.

It was also to be under one roof with the main objective to discuss and agree on plans to transform the destination to be a tourism haven in line with Vision 2020, as well as the Ministry of Tourism and Culture’s strategy for 2015-2020.

Speaking at the forum, Benjamin Roberts, Minister of Tourism and Culture, informed the public relations and marketing firms representatives that the Ebola disease outbreak in West Africa had caused the arrival numbers todecline by 42 percent in a 2013/14 seasonal basis.

He said 18.2 percent growths may seem daunting for the public relations (PR) and marketing firms (MF), but it should not, adding that PR and MFin Spain had been on board, and plans are underway to bring onboard PR and MFfirms to cover Scandinavia- Sweden, Denmark, Norway and ultimately to cover Finland and Russia.

“Amidst all this, it is our expectation that the PR and MF will create the requisite synergy to ensure our realisation and surpassing of the 500,000 tourists by the year 2020,” he said.

The Tourism Minister drew their attention tothe various engagements, and on the selected action points that were agreed during the Ebola outreach mission in November of last year, and the meeting in May of this year and the points they had agreed on.

Minister Robert said the GTBoard would work with all PR and MF representatives, and request fora list of all tour operators and travel agencies to enable the board’s marketing department determine the quantum of promotional marketing brochure literature to send out to the various destinations in which they have PR and marketing representation.

Picture: Conference officers hold up empty ballot boxes for inspection prior to the vote to elect five non-permanent members of the Security Council. UN Photo/Cia Pak

In one round of voting the United Nations General Assembly on 15 October 2015 elected Egypt, Japan, Senegal, Ukraine and Uruguay to serve as non-permanent members on the Security Council for two-year terms beginning on 1 January 2016.

The Western European and Others Group is contesting no seats this year, as its two seats (currently held by New Zealand and Spain) are up for election every even calendar year.

The five permanent Council members, which each wield the power of veto, are China, France, Russia, the United Kingdom and the United States. The non-permanent members that will remain on the Council until the end of 2016 are Angola, Malaysia, New Zealand, Spain and Venezuela.

Under the UN Charter, the Security Council has primary responsibility for the maintenance of international peace and security. Each of the Council’s members has one vote. Under the Charter, all UN Member States are obligated to comply with Council decisions.

The Security Council takes the lead in determining the existence of a threat to the peace or act of aggression. It calls upon the parties to a dispute to settle it by peaceful means and recommends methods of adjustment or terms of settlement. In some cases, the Security Council can resort to imposing sanctions or even authorize the use of force to maintain or restore international peace and security.

The Security Council also recommends to the General Assembly the appointment of the Secretary-General and the admission of new Members to the United Nations. And, together with the General Assembly, it elects the judges of the International Court of Justice.Source: UN News Centre