Aminata Jaiteh, the Public Relation Officer of Early Childhood Development (ECO) Unit, under the Ministry of Basic and Secondary Education has said that the importance of good foundation for a development of a child cannot be over-emphasised as every child needs a good foundation to grow.
Madam Aminata Jaiteh made this remark while giving her keynote address at the Wellingara C.I.S. Nursery School's graduation ceremony over the weekend.
According to her, it will be very difficult for a child to attain his/her full potential in the absence of a solid foundation.
"Building a good foundation for the holistic development of the children of this country needs strong partnership with many stakeholders," she said.
According to her, the government of the Gambia has created in its Ministry of Basic and Secondary Education a unit called, "Early childhood Development" that coordinates, supervises and monitors the activities of the other stakeholders in this partnership.
For his part, Mr. Sainey Gibba, the Head Teacher of the school, said nursery is an institution where children learn skills to develop their full potential in diverse ways. He stated that these institutions are meant to build a solid foundation for the child by preparing them to grow up with meaningful skills that will enhance their future life.
According to him, the graduates have achieved the required foundation. He said he is of the belief that these children will face little or no difficulty in their Lower Basic education.
Mr. Gibba further revealed that their achievements in terms of a child's preparedness are gaining both national and international recognition as a result of his gallant teachers' commitment in ensuring quality service delivery. He cited their breakthrough in the Jolly phonics methodology.
"This attracted both national and international attentions, which triggered many visitors to our school to see for themselves the type of services we are rendering," Mr. Gibba stated.
Mr. Gibba commended one Mr. Lamin Kanteh of Studio Kanteh, Musa Jawo, an international representative and Lydia, a Peace Corps volunteer working with the Gambia College and all those who have in one way or the other contributed in making this occasion a success.
Other speakers included Kenbugul Dicko, C.I.S' Programme Coordinator and Lamin Wally, who spoke on behalf of the Parent Teachers Association (PTA).
The vote of thanks was delivered by Momodou Gammo, the Deputy Head Teacher of the school. 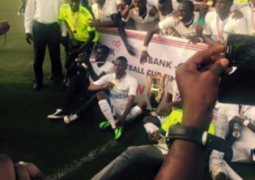