People in rich developed countries tend to think of climate change as a threat to our future but communities in developing countries are feeling its effects now more than ever before.

Poor people are most vulnerable to changes in their environment, with many of them living in fragile housing conditions on marginal land.

Often they rely heavily on agriculture and lack savings or insurance to recover from disaster-related incidents.

The latest scientific report tells us that we must keep global temperature rise below two degrees to avoid catastrophic climate change.

But communities in the developing world are already suffering from the pinching effects of climate change, pushing poor people even deeper into poverty.

In such communities, the effects of climate change are clearly visible all around and evident in the lack of rainfall and in people having to walk longer distances to access drinking water.

They are also evident in too much rainfall bringing floods and washing away crops and homes, and in a rise in sea levels as a result of warming oceans, unusual and erratic rainfall which can cause crop failure, leading to hunger and loss of livelihood, as well as rapid increase in malnutrition.

Moreover, there is increased prevalence of malaria as mosquitoes spread to new areas, more environmental refugees (people who are forced to leave their home to find food and shelter), and mounting pressure on vulnerable regions, leading to tension and conflicts.

Thus, the emergence of organisations working to ensure that communities that are most affected by climate change are able to adapt to changes to their environment where this is possible, and are better prepared for natural disasters.

Children from poorer backgrounds are more likely to play truant, and to be excluded from school. Also, access to and completion of higher education are significantly affected.

However, poverty should not be a licence for anyone to steal or take someone’s life.

Instead, one should work hard to overcome poverty.

“Poverty is the worst form of violence.”
Mohandas Gandhi 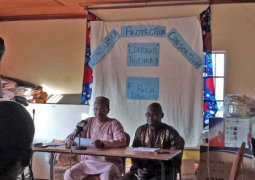 Lamin qualifiers due to kick off June 12