Now that our brother, Oumarou, was fifteen, none of us knew how to relate to him anymore. He wouldn’t let us touch his books. He had been behaving oddly and had his heads in the clouds. He talked to us less and less, sometimes, staying only to have his meals and kept himself locked in his room to read.

Mama supported him when he wouldn’t let us come near him. She would say, “he is busy, he needs to read.”

Oumarou was up to something, Saffie and I knew him too well to think so. Whenever he came home from school, he would immediately shut himself in his room and come out hours later, looking very jumpy with blood-shot eyes, perhaps scared like a scalded cat. Sometimes he wouldn’t go out the whole day, he would stay indoors.

One day, a pungent smell emanated from his room, something like weed. Saffie and I knew the smell because some boys smoked it near the neighborhood. They hung around dilapidated houses to smoke and afterwards stagger on their way home like drunkards.

Saffie and I are identical twins, wore the same clothes, did things together and our favorite game was to confuse our parents over our identities.

It was only Oumarou who could tell us apart. We couldn’t figure out how he did it. He was our parents’ only son and they saw whatever he did as a part of growing up unlike us who had to grow fast so as to assume certain roles to help mama in some of the house-hold chores.

Oumarou was a lean boy with a lean face, big eyes with thick long eyelashes like a girl’s. Saffie and I wished that we had them.

It was this love we feel for our brother which made us sometimes behave like boys, imitate him so as to earn his love and to wait for him at his school gate after school. One day, after their bell rang, my brother came out, but he wasn’t alone, he was surrounded by some older boys in his school and they were bullying him.

It was that moment that Saffie spotted one of the teachers and asked him to help him.

When the bullies saw him, they took to their heels and there stood our brother like a scarecrow with his disheveled hair and uniform. He thanked the teacher and we walked home silently as if the silence told us everything we needed to know.

That night, after supper, he told our parents about the bullies and what they forcefully made him to do.

“It was their threats which made me smoke a joint one day after school in my room to prove that I am not a sissy,” he said.

The way he said sissy made a giggle escape Saffie’s heart-shaped mouth and earned her a disapproving glare from papa. She struggled to maintain a straight face.

“It is all a part of growing up and those bullies want you to imitate them,” he gave a tired sigh and added, “I will see the school authorities tomorrow.”

Mama only said “humps” and “he-wos” at the right places, raised and let her shoulders drop down many times to show her state of shock.

That night, assured that our brother’s concern was going to be solved, Saffie and I slept like babies for the first time in weeks, holding hands. 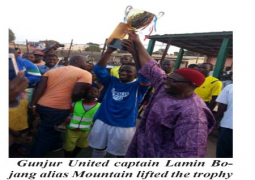