The Imam of Kanifing South Mosque, Baba Leigh, yesterday told the TRRC that The Gambia Supreme Islamic Council backed former President Yahya Jammeh in executing nine death row inmates, by issuing a press release indicating that they (inmates) were killed by the Islamic Law and not Jammeh.

Imam Leigh said Jammeh had informed the Supreme Islamic Council that he was going to kill some people and that he didn’t want anybody to beg him.

“After three days of the killings, the Supreme Islamic Council called for a press conference and said: “Those inmates were not killed by Jammeh but by Islamic laws. I went to Lamin Touray, the president of the council and told him they should not do such, but he said they had no choice.”

He alleged that Lamin Touray himself knew that Islamic laws didn’t kill those inmates, arguing that in Islamic laws, that’s not the way to do it.

“In Islamic laws they should call for Cadis and analyse it in line with the teachings of Islam before executing people.”

At this juncture, Lead Council Essa Faal outlined an evident news article from media that the Islamic Council had agreed to the killings and they endorsed the execution of the nine inmates; adding the council said Jammeh had the mandate for the implementation of the death penalty.

“I also did a press release and I indicated that Jammeh had killed them already, and is not right, it’s not part of the religion. It was only published by Standard and Gambia Daily newspapers and it was that time they were closed.”

He said after that incident, he began having difficulties and many where calling him to leave the country amid his arrest.

Imam Leigh added that his sister came to him one early morning and told him that his colleagues (imams) have reported him to Jammeh and they would arrest him.

He continued that he told her that he wouldn’t go anywhere. He added that in those days; for two years, he was warned by EU, American Embassy and Amnesty but he didn’t heed.

“I was later arrested by two people who said they came from the NIA headquarters and I asked them of their names: They were Haruna Suso and Sanna Saidykhan.”

He explained that as they were taking him, he was able to call his relatives and some friends. He continued that upon arrival, he was escorted and a search was conducted on him and was later put in a small room.

“I was there till 1 a.m., then someone came which I thought was Bakary Beyai who was coordinating tortures at the NIA. Later, some people came and they were all masked in black-black.”

He testified that he was taken in a dark place, and when he entered, someone slapped him from the back and asked whether he called himself an imam?

“I told him I am an imam and he told me “here is Oga before God.” They started beating me naked. Towards the end, I was not able to hear anything and they poured a cold water on me and when I woke up, I was asked why I disliked Jammeh and whether I was more educated than Abdoulie Fatty and Lamin Touray?”.

Imam Leigh further adduced that some had chains and sticks, adding that they tortured him for three sessions on that fateful day. According to him, he was locked in a cell till the following morning. He said they beat him but conscious of not wounding his face.

“They interrogated me and asked where I used to get my money. They even said I was paid by the American Embassy because I had many cars and compounds.”

Imam Leigh also disclosed that they gave him D25 to buy something. He recalled that he was tortured and interrogated for nine days.

“They told me if I wanted to leave, I must say that my close brother Kebba Touray, Omar Jallow (OJ) and American Embassy made me do my activities but I told them I wouldn’t.”

He testified that he met another two people at the gate upon his release that rearrested him and took him inside where he was tortured again. He said he was also handed over to “Bull-Dozers” – a joint operational security forces for interrogation.

Imam Leigh narrated that he was also taken and put in a hole called Bamba-Dinka for five months, 17 days and five hours. There, he said, he was told that he would die but prior to that, he would be buried in a grave up to his chest when he wouldn’t be able to speak.

He said he was later called by Jammeh through the other imams to apologise and to thank him for his release.

He named Imam Ratib of Banjul, Cherno Alieu Mass Kah, Alhagie Alieu Mboge, Abdoulie Fatty and Lamin Touray as those who spoke on his behalf on GRTS, saying it never came from his voice and he would never thank Jammeh.

“I was wounded on my back and it went up to three years without cure and flies were coming around me.” 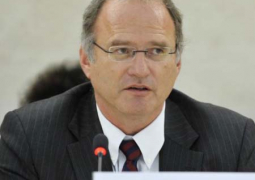