Speaking to The Point in an interview yesterday at his Kanifing Estate residence, Imam Baba Leigh said from Sheikh Omar Foutiyou's own words, Gunjur was identified for him by Almighty Allah in his own way as one of the fastest places where prayers can be answered by the Almighty.

He noted that it is no longer secret to the world of open minded genuine people of this world today. Considering the friendly environment and peace that prevails not only in Gunjur or Kombo but in The Gambia at large, when other very close neighbouring countries are living and facing very difficult lives to the extent of waging wars, killing each other, dying under extreme poverty and ignorance. The Gambia is enjoying abundant peace and tranquility in a very peaceful atmosphere, even without any natural or material resources.

"Nothing like that can be done without the prayers of our ancestors and our blessed land," he noted.

"So that being the case, Gunjur is not an ordinary land or place like any other place." According to Imam Leigh, Islam is very concerned about what can unite people and bring them together under the banners of Islam, under the Umbrella of the Holy Quran. 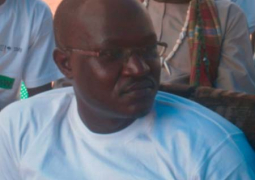