Media practitioners drawn from the print and electronic media recently concluded a three-day message development on human wildlife conflict, a programme held at the Jenoi Agricultural Centre in the Lower River Region.

According to the organizers, the programme was designed to ensure sustainability on community awareness by providing audio tapes that would be used at community radios to address human wildlife conflict with little or no technical support from the department.

Mr Kawsu Jammeh, environmental education and communication expert who doubles as (PoWPA) Programme of Work on Protected Area Project Manager, said the purpose of the convergence was to produce an audio theatre cassette to be used in the community radios in three major local languages as a tool to sensitize the local people.

“With the caliber of experts gathered I am of the belief that our target and desired objectives will be achieved,” he said.

According to him, the department of Park and Wildlife management is responsible for managing wildlife in The Gambia, adding that if human life is endangered by wildlife, the government employs some strategies to control the problems, which would warrant balance in the ecosystem.

“When we think that a particular wildlife species is over the population in an area, we need to come up with a way that will stabilize the population trying to create balance between wildlife and human life,” he said.

He said the Gambia population is increasing unprecedentedly meaning there is increase in demand for natural reasons, for shelter, for settlement and more land for agriculture.

This, he said, more forest cover is disappearing and wildlife animals lose their habitat, which is caused by anthropogenic activities.

Mr Jammeh further revealed that the government had invested lots of money to promote food security but wildlife rampages coupled with other agricultural problems, such as drought among others, are affecting food security.

“Food insecurity is not at the advantage of the department and to address some of these things, we need to collaborate with all the natural resources line departments and ministries, including agricultural projects such as the NEMA project,” he added.

To be able to get public participation, he went on, the general public needs to be well informed on the issue of human wildlife conflict through the available media channel in a form of drama performance.

Abdoulie Sawo, a park warden, stated that the government through the department was working in collaboration with the line ministries and local people living adjacent to the protected areas through their site management committees to ensure the protection of flora and fauna.

He opined that rapid population growth and farm mechanization had resulted to acquisition of more areas of land for cultivation, thus create imbalance in the ecosystem.

He said reports show that climate change is also a contributing factor that continues to influence stalinisation in the rice fields, flooding of freshwater wetlands and mangrove retreat which serves as a habitat for many aquatic species.

Highlighting some of the progress made by the department, he said, the department had created hippo barriers in Sambel kunda and Bush town to prevent human wildlife conflict, thus promote food security and wildlife conservation in parallel.

Sainey Dibba, Farafenni community radio manager, said in as much as they want to achieve food security they also needed to consider the biodiversity for a balanced ecosystem.

He added that sustainable managing of natural resources improves community livelihoods through promotion of cultural and spiritual sites for tourist attraction, which creates job opportunity through handicraft, guiding, etc. 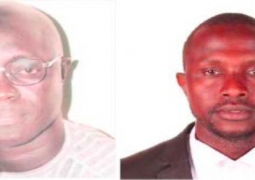