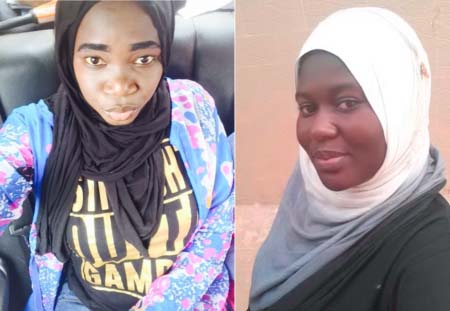 Nowadays, it is clearly seen that many of the Gambian girls, to be specific, have embraced the ‘Hijab’, wearing of which is said to be a part of Allah’s commandments.

However, the question is - what do they wear it for?

Though, many girls have different reasons which inspired or made them embrace the ‘hijab’, others do it because of fear, whilst others because of fashion.

According to Sainabou Ceesay of London Corner, the reason girls are wearing the hijab is because the deen is rising at a higher level, “Ma Sha Allah!”

She added that most of the sisters are now seeing it as something obligatory. “Some years back it was different”.

“The society made us to believe that wearing the hijab was just a part of our culture,” she said.

She emphasised that this was clearly a misconception, and that with time the youths have started learning more and more about Islam, and thus most of the misconception regarding the deen is gradually fading away.

Ms Ceesay pointed out that using ‘hijab’ as fashion may be the case for some, but may be just 5 per cent out of the 100 per cent who wear it.

“I often hear people say most hijabis wear the hijab to go with the flow, but I’m totally against it. Intention is what matters, and some might have worn it because they simply admire the way hijabis dress; however, as time goes on they will begin to realize the true essence of the hijab, and that motivates them to continue wearing it,” she opined.

She further stated that as a young Muslim who grew up into a Muslim home, her parents were always an inspiration for her.

She added that they made sure there family is brought up well, and in the Islamic way by dressing decently.

“The time I was 9, I already got used to dressing modestly,” she said.

Ms Ceesay disclosed that it has been eight years now since she embraced that ‘hijab’ and still counting.

She advised all those doing it wrongly, including herself never to lose hope, adding that “we aren’t perfect, but we should continue to strive because no human being on earth wakes up one morning and becomes the perfect man or woman; everything we do in life requires efforts”.

“We have to move from one stage to another. From the short clothes to wearing long outfits, from letting go of attachments to wearing small scarfs, from wearing tight fitted outfits to wearing loose ones.”

She further said that one doesn’t have to remain static at one stage. “Allah loves it, when his servants make efforts. Never be sad because I’ve seen a certain sister wearing the perfect hijab, and you begin to look down on ourself.”

“Walk to that sister and ask how she got to that stage, and you won’t believe the hurdles she went through. Let’s just have the zeal and Allah will see us through”.

For her part, Fadima Ceesay of Serrekunda said ‘hijab’ is something that Allah SWT told the Prophet SAW to convey to the Muslim women and men.

She added that it was said: “Tell The Believing Men And Women To Lower There Gaze and Guard There Modesty”, meaning it is compulsory for every Muslim woman to wear the hijab in order to please Allah SWT

Ms Fadima said some of the girls she see tend to make ‘hijab’ as a trend or fashion, but that is totally wrong and she doesn’t even see the reason why they are doing that, “Allahu Ahlan Allah Knows Best”.

“Well, all I want to say is if you can’t do the hijab or you are not ready for that, please don’t tarnish the image of others. Hijab needs a lot of commitment which so many of us don’t know. Let us take the hijab seriously, and help each other,” she said.

Fatimah Samateh, a resident of Tallinding, also stressed that people have different reasons as to why they put on the hijab.

However, she said, our primary aim is to please Allah SWT and not the trend of fashion, stating that some actually put it on because they see their friends with it, and they look absolutely beautiful.

So they also want to dress like their friends to follow the new trend, but mind you, if that’s one’s sole reasons for putting it on then you are contradicting the teaching of Islam and the rule of the hijab.

“I put on the hijab because it’s mandatory upon every Muslim woman who has reached the age of puberty. It’s not by choice as many interpret it; it’s a must! And in other to fulfill one of my religious obligations, I put it on.”

“After all, I only cover my hair and not my brain; thus it does not put any restrictions on my performance”.

She explained: “I have started putting on the hijab since a very long time. I do not regret it. I have never for one instant regretted it. I do not regret it even one iota. Inshallah, you will discover that you feel the same. Even within a few months, I came to feel that I would not be properly dressed if I went out not wearing hijab. This is when you know that you have made it”.

The 21-year-old hijabi advised her fellow sisters to keep up the momentum, saying that it’s not easy putting on the scarf, especially in this hot season, but the reward is huge.

“A day will come when you’ll realize that all the sweat was worth it.  Most importantly, wear it for the sake of Allah SWT,” she stressed.

She emphasised the importance of obeying Allah SWT who is the source of everything we have, our existence, our life, our capability, even our goodness.

If we worked for millions of years, we could never repay Him for all that He has given us. And yet, He does give it to us, and all He asks in return is that we do our best to obey what He has commanded us.

Surely, wearing hijab is a very small thing that you can do for Him, compared to what He does for you, she concluded.