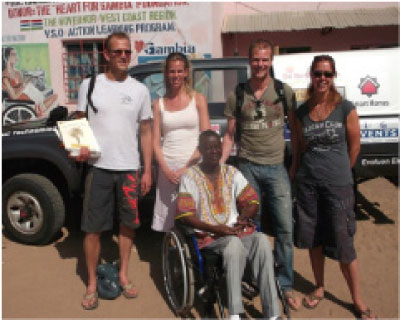 The Gambia Association of Physically Disable (GAPD), Brikama Branch recently received a donation of vehicle from their partners- Heart for Gambia Foundation, at a ceremony held at GAPD’s office in Brikama.

Speaking to reporters at the presentation ceremony, Mr. Abdoulie Jawneh, the President of GAPD spoke about the contributions of his organisation to the development of the country.

Despite their disability, he said, the organisation and its members have been engaging in meaningful developments in the country.

According to him, a good number of disable persons with skills are working in many sectors of society.

“Many people living with disability are working very hard and are living a decent life,” he said.

GADP, he said, has a membership of one hundred and seventy-six members, both men and women.

He then called on other persons with disabilities, especially in the West Coast Region to join the organisation, so as to benefit from their initiatives, such as training packages, exchange visits, etc.

According to him, GAPD with the help of its partners like Heart for Gambia Foundation has built a skill training centre in Brikama, where they had trained many disable people in the region, ranging from tailoring, tie and dye, ICT, soap-making to batik, among other things.

Mr. Jawneh said the donation of the vehicle will ease their transportation problem and thanked the donors for the gesture.

He thanked one Abdoulie Leo, a teacher at Marakissa Primary School, who have linked them with the foundation.

He further explained that the foundation in their strive to support the organisation have given scholarships to a number of students in the area, some of whom, he said, are pursuing higher education at the University of The Gambia, GTTI, MDI and other higher institutions of learning.

The donated vehicle, Mr. Jawneh said, would be handled with care to produce the desired results.

According to Mr. Jawneh, persons with disabilities can play an important role in society, if given the opportunity saying that ‘disability does not mean inability.’

GAPD’s President then called on other partners to support disability organisations in the country to enable them play their part in national development.

Highlighting the United States Ambassador’s visit to the GAPD office, he thanked the US Embassy Banjul for the support they have been rendering to his organisation.

He also commended Governor Mr. Lamin Sanneh of the West Coast Region for allocating a plot of land to the GADP.