As the world is advancing and everyone is busy educating their children both male and female alike, it is very sad to see the existence of child and early marriage in the African continent.

Africa is still struggling to eradicate child and early marriage, as if we are still in the Stone Age.

Imagine a girl child who needs to be with parents at home to help her grow mentally, physically and psychologically, but is denied all that and sent to a marital home to perform the duties of a wife and parent.

How do we expect that child to grow up, or get pregnant, carry a child for 9 months or more and go through labour?

Marriage is no child’s play; so it should be left to adults. When a child starts menstruating, her breasts starts showing off and growing up healthily, our people will say she should be sent away in marriage because she has all it takes to become a wife and a mother.

Facts about child and early marriage

According to the International Center for Research on Women (ICRW), 100 million girls will be married before the age of 18 in the coming decade.

Most will be in sub-Saharan Africa and the Asian subcontinent (Nepal, India, Pakistan, and Bangladesh).

In Niger, for example, 77 per cent of women in their early 20s were married as children. In Bangladesh, 65 per cent were married.

Child marriage also occurs in parts of the Middle East, including Yemen and the rural Maghreb.

In the United States, child marriage is still permissible in some states, with parental or judicial consent.

Globally, according to UNICEF, 36 per cent of women aged 20-24 were married or in a union, forced or consensual, before they reached 18.

An estimated 14 million girls between the ages of 15 and 19 give birth each year. They are twice more likely to die during pregnancy or childbirth than women in their 20s.

Girls who marry between the ages of 10 and 14 are five times as likely to die during pregnancy or childbirth as women in their early 20s.

Child marriage has many causes: cultural, social, economic and religious. In many cases, a mixture of these causes results in the imprisonment of children in marriage without their consent.

The interior part of the country believes that once a child is menstruating and the breasts protruding, she is fully fit to take up marital functions.

Some tribes also betroth a girl-child once she was born, to their own relatives, and at the end of the day, whether she has grown up or not, anytime the man or the family she is betrothed to wants, they will come for her and take her as a wife.

Some families are also running away from shame, based on the belief that if they do not send their child into marriage, she will bring shame to them by getting pregnant out of wedlock.

Poor families sell their children into marriage either to settle debts or to make some money, and escape the cycle of poverty.

Child marriage fosters poverty, however, as it ensures that girls who marry young will not be properly educated or take part in the work force.

Poor families will not hesitate to give out their child’s hand in marriage to a semester, who promised to take good care of them after marrying their daughter.

In certain cultures, marrying a girl young presumes that the girl's sexuality, therefore the girl's family's honour, will be "protected" by ensuring that the girl marries as a virgin.

Child marriage is a product of cultures that devalue women and girls and discriminate against them. "The discrimination," according to a UNICEF report on "Child Marriage and the Law," "often manifests itself in the form of domestic violence, marital rape, and deprivation of food, lack of access to information, education, healthcare, and general impediments to mobility."

Many countries such as Pakistan have laws against child marriage; however, the laws are not enforced. In Afghanistan, a new law was written into the country's code enabling Shiite, or Hazara, communities to impose their own form of family law--including permitting child marriage.

Poor families are tempted to sell their girls not just into marriage, but into prostitution, as the transaction enables large sums of money to change hands.

However, some families are not aware of their child being trafficked purposely for prostitution, as some of them are promised by the middle men that they will be given good jobs when they reach their destination.

The Convention on the Rights of the Child was designed to guarantee certain individual rights - which are abused by early marriage.

Rights undermined or lost by children forced to marry early are:

The right to an education

The right to be protected from physical and mental violence, injury or abuse, including sexual abuse, rape and sexual exploitation.

The right to the enjoyment of the highest attainable standard of health, the right to rest and leisure, and to participate freely in cultural life, the right to not be separated from parents against the child's will, the right to protection against all forms of exploitation affecting any aspect of the child’s welfare, and the right to eventual employment.

As a nation, why don’t we abolish child and early marriage?

A child is just a child, so if you want to bring other responsibilities into her life such as marriage, this will make her abnormal because she will still behave and think like a child.

We have seen children who died while giving birth. We have seen at a point where they lost their womb to early pregnancy.

Let’s hear the children out, and make sure that whatever we do is in their best interest.

Your child needs you to help her grow and live a meaningful life some day; so don’t contribute to her downfall or else she will grow up hating people throughout her life.

Why do you give out your child to a man old enough to be her father, who will force her and raped her?

Where is that bond that exists between you and your child?

Are you the kind of man that marries children and bring them to your house as your wife? If yes, how will you feel if that child was your own flesh? Don’t hurt someone’s child if you will not like to see your child hurt.

As a society, we all should take part in grooming up children to be better people tomorrow, rather than violating their rights and sending them to their graves in the name of marriage.

Let’s hear out our children, and end child marriage today for a better future for all! 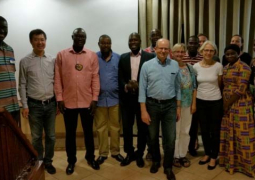