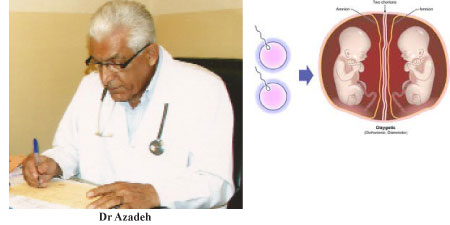 Hello and a warm welcome to yet another edition of Health Matters, your weekly health column.

In our today’s edition, Dr Azadeh, our health adviser, a senior lecturer at the Medical School of the University of the Gambia who is also a senior consultant specialist in Obstetrics and Gynaecology is focusing on the multiple pregnancy risks and possible complications during pregnancy and at child birth.

Dr Azadeh - How multiples are made?
Fraternal twins — the most common kind — occur when two separate eggs are fertilized by two different sperm. Each twin has his or her own placenta and amniotic sac. The twins can be two girls, two boys, or a boy and a girl. Genetically, they’re no more alike than any other siblings. Identical twins occur when a single fertilized egg splits and develops into two foetuses. Identical twins might share a placenta, but each baby usually has a separate amniotic sac. Genetically, the two babies are identical. They’ll be the same sex and share physical traits and characteristics. Rarely, identical twins fail to completely separate into two individuals. These babies are known as conjoined twins. Triplets and other higher order multiples can be identical, fraternal or a combination of both.

Sometimes a seemingly normal twin pregnancy is later found to have only one baby. This is known as vanishing twin syndrome. Such an episode can be heartbreaking, frustrating and confusing. Often, there’s no clear explanation for the loss.

A twin pregnancy is a double blessing, but it can also carry greater risks than singleton pregnancies.

In the U.S, about three in every 100 pregnant women give birth to twins or triplets and by many accounts, twin pregnancies are on the rise and also now quite common in the Gambia too.

Be prepared. Familiarize yourself with the top 11 things you didn’t know about your twin pregnancy from conception (getting pregnant) through delivery.

No. 1: You are more likely to become pregnant with twins naturally when you are in your 30s and 40s.
We all hear that the older we get, the harder it is to conceive (getting pregnant), but advancing age may actually increase the likelihood of a twin pregnancy, “Once you are 25 or into your 30s and 40s, menstrual cycles are not always regular anymore. If you are not regular and do ovulate, you could be ovulating two follicles at the same time.” Voila! A twin pregnancy -- without assisted reproductive technologies.

No. 2: If you have two buns in the oven, you may need extra folic acid.
Women pregnant with twins may need more folic acid to help stave off birth defects,

“We recommend 1 milligram of folic acid per day for twin pregnancies and 0.4 milligrams for singleton pregnancies,” who has twins. Folic acid is known to reduce risk of neural tube birth defects.

No.3: Women pregnant with twins clock in more time at the Ante natal Clinics.
Twin pregnancies require more monitoring than single pregnancies. “We tend to do more frequent ultrasounds for growth in twin pregnancies, compared with one anatomy scan and one growth scan in a singleton pregnancy.”

But along with additional testing comes risk. For example, the chance of miscarriage after some tests are higher in twin pregnancies,. “You are sticking the mother twice, so if the risk of miscarriage is one of 1,000 in singleton pregnancies, it would increase it to one in 500 for twins.”

No. 5: Spotting blood may be more common during twin pregnancies.
“When you spot blood in the first three months, you could be undergoing a miscarriage (abortion), and miscarriages are more common in mothers of twins, triplets, and quadruplets -- so we see more spotting with multiples,”

But a little spotting is no reason to hit the panic button even in twin pregnancies. “A little spotting in the absence of cramps is reassuring, but when you are cramping, passing clots, and actively bleeding, that is a sign that’s something is happening and you should seek medical advice.”

No. 6: You don’t feel the babies kicking any earlier with twin pregnancies.
“Generally when you are pregnant with twins, foetal (baby’s) movements become more noticeable at weeks 18 through 20 of pregnancy, and the same is true in singleton pregnancies,” When a woman begins to feel bayby’s movements actually depends on whether she has been pregnant before. “If you have been pregnant before, you know what movement is, but if you are pregnant for the first time, you really can’t distinguish the movement from other activity.”

No. 7: Moms pregnant with twins may gain more weight than moms carrying one child.
“With twins, mothers gain more weight as there are two babies, two placentas, and more amniotic fluid,” “You also need more calories for twin pregnancies.”

Still, there is not a well-established formula for weight gain during twin pregnancies, “The average weight gain is 25 pounds for singleton pregnancy and 30-35 pounds for twins. We don’t want moms pregnant with twins to gain more than 40 [pounds] or less than 15 pounds.”

• Women of normal weight should aim to gain 37-54 pounds

Exactly how much weight should you gain? talk to your health care provider about that, because every pregnancy is unique.

“While gestational diabetes is more common, the morbidity associated with it is less common because twin babies are not big babies.”

No. 9: Risk of complications during pregnancy are higher in twin pregnancies.
“People really don’t know what causes preeclampsia to start, but we know it occurs more frequently in twin pregnancies. Preeclampsia is marked by high blood pressure, protein in the urine, and sometimes swelling in the feet, legs, and hands. It is the precursor to the more serious, potentially fatal death.

No. 10: Labour (and delivery) may come early with twin pregnancies.
Most moms carrying twins go into labour at 36 to 37 weeks, as opposed to 40 in a single pregnancy, and some may go even earlier. “Generally, if the twins are born after 34 weeks, there should not be a major concern, but a premature baby is still a premature baby.”Twins are at higher risk of early labour and delivery and have higher degree of respiratory (breathing) issues.” As a result of being born too early, twins may be born at low birth weights, and such babies tend to have more health problems than babies born weighing more than 5.5 pounds.

Unfortunately, there is no evidence that bed rest alone prevents early labour or delivery in twin pregnancies, and the use of agents to stop early labour have not been proven to be effective either. “Stopping premature labour is challenging in multiple gestations.”

You can get more information about the multiple pregnancies, at RVTH, Obs/Gynaecology Department, Poly clinic and all other Government’s Hospitals and Clinics throughout the Country, number of NGO and Private Clinics, E-Mail azadehhassan@yahoo.co.uk and call DR AZADEH on 7774469 working days between 3-6pm.