The minister for Health and Social Welfare has said the rate of diabetes in the country is alarming and efforts must be employed to contain the situation.

Health Minister Fatim Badjie was speaking recently at Gamcel Headquarters during the commemoration of Diabetes Day.

“There is an urgent need for action to protect the health of our people, particular focus will be placed on the importance of education for health targeting people with diabetes and people at risk in order to reduce impact of diabetics in the world, Gambia in particular,” she said.

She finally challenges the youth, healthcare community, peer health educators, parents, guardians and the media to join forces to help those living with diabetes, prevent the condition of those at risk, and avoid unnecessary death and disability.

Minister Badjie said that diabetes is everybody’s concern as it knows no boundary, no nationality, no race, no class and no gender.

She added that the day aims to increase awareness on the effects of diabetes and its complications among the general population and professionals in a range of sectors.

The health minister added that it also aims to build awareness among children and young people the warning signs and risks factors for diabetes and that in many cases type 2 diabetes can be prevented through healthy eating and physical activity.

She noted that it can affect anyone, especially those who are not mindful of their types of diet.

She told the gathering that diabetes is a killer disease in terms of its complications. Uncontrolled diabetes leads to blindness, impotence, kidney failures, stroke, coma, heart disease, hypertension and amputation medications.

According to her, people can live a normal and even healthier life with diabetes if they exercise regularly and watch what they eat.

Momodou Gassama of WHO stressed that diabetes is a serious, chronic and costly disease that imposes life long demands not only on people living with the disease but also on their families.

According to him, it is estimated that some 230 million people worldwide currently suffer from the disease and this number is likely to double by 2030 if effective interventions are not undertaken.

He explained that WHO engages people in a worldwide campaign to protect our future from diabetes, and called upon member states of the WHO African region to scale up the development and implementation of comprehensive and integrated diabetes prevention and control programme.

Almami Gassama, director general of Gamcel, in his welcoming remarks, expressed happiness as his institution is chosen as the host for this year’s event.

He added that the day is set to create awareness and prevention of  the general public, while urging Gambians to join hands on creating more awareness on diabetes. He also assured the gathering that, his institution would always remain a partner to the initiative.

At the end of the programme, Gamcel presented a cheque for D60,000 to the Gambia Diabetes Association to boost their efforts in the fight against diabetes in the country. 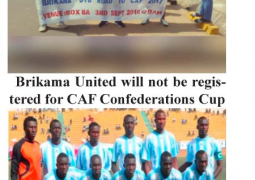