Hawks on Sunday beat Wallidan 5-0 in the all-Banjul derby fixtures played at the Banjul KG5 Mini Stadium to grab third spot in the 2015-2016 Gambia Football Federation domestic division one league.

The red devils made a woeful start to the country’s domestic division one league losing most of their matches and also struggled in the danger zone in the first round before snatching tremendous results in the second round. Four goals from striker Musa Barrow and one from Lamin Chatty as Wallidan surrendered the vital three points to Hawks to griped third spot in the top flight seven more games to go.

Relegation threatened Serrekunda United 2-1 at the Serrekunda East Mini Stadium to maintain their hopes of staying in the top flight for another season and avoid relegation to the second division.

Bombada came twice from behind to draw 2-2 with Banjul United at the Brikama Box Bar Mini Stadium, while the defending league champions Gambia also drew 2-2 with Samger at the Banjul KG5 Mini Stadium in the other fixtures at the weekend.

Hawks, Gamtel and Real De Banjul are third, fourth and fifth with 22 points each in fifteen league matches. 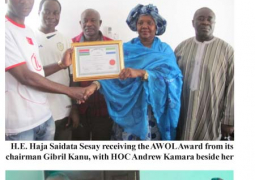